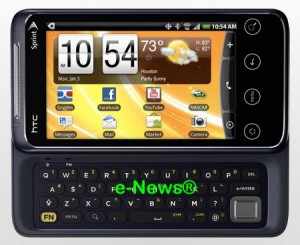 The Shift will run Android 2.2 and features a 3.6-in. display, somewhat smaller than the 4.3-in. HTC Evo 4G that Sprint began selling in June, making it the first 4G smartphone on the market. Verizon Wireless announced four 4G LTE phones on Thursday, all with 4.3-in. screens, and Verizon officials pointed out that customers are eager to use larger screens for viewing videos and other content.

But Sprint’s David Owens, vice president of consumer acquisition, said Sprint already had the larger screen and felt the smaller Shift display would appeal to more customers not being served by larger screens. The Shift also has a slide-out horizontal keyboard, something seen in the third of the Sprint 4G phones, including the Samsung Epic 4G, which has a 4-in. screen.

Today’s Shift announcement came on the same day as Sprint and Research in Motion announced plans to launch the BlackBerry PlayBook tablet for Sprint’s WiMax network this summer. Processing speed in the Shift will be 800MHz, another indication of a reduction in size, as compared with Evo and Epic having 1GHz processors. The Playbook will have a a 1GH dual-core processor.

All three of Sprint’s 4G phones are hot-spot capable. Some retailers are already selling the Shift, although Sprint didn’t indicate an official launch date in its stores. Owens said the Shift is a good example of Sprint offering a variety of products, with 17 devices now on the market or announced for 4G WiMax, including a new MiFi 3G/4G Mobile Hotspot that will update the heavier Overdrive hotspot announced last year. “We will have a plethora of devices [for 4G] in the coming year,” he told Computerworld.

Owens said Sprint’s device variety and commitment to a WiMax rollout are driving subscriber growth, along with an unlimited voice, text and talk plan that will cost $69 monthly for many phones and $79 monthly for smartphones. “We feel good about how we are positioned in the market,” he said. Customer surveys show that buyers consider Sprint along with top carrier Verizon as their most likely next carrier, Owens added.