F-35 combat-capability could be delayed till 2020 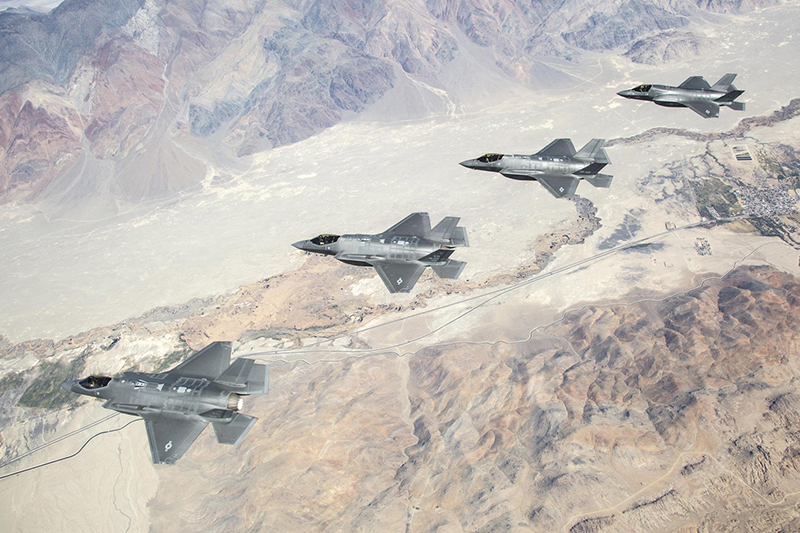 #thenewscompany : Hundreds of problems hinder the development of the F-35 stealth fighter, says a report released by the US Department of Defense’s Office of the Director, Operational Test & Evaluation. The scale of the issues is sufficient that a report by director J Michael Gilmore says the aircraft may not be fully combat-capable before 2020. Further, the estimates to fix them could reach US$1.125bn over three years.

The fifth-generation jet is designed to save money through a modular design allowing variants for the US Air Force (F-35A), Marine Corps (B version) and the Navy (the aircraft capable ‘C’ alternative. F-35 program officials state the jet’s progress through the System Development and Demonstration (SDD) phase is progressing to plan and operation testing issues are being fixed rapidly but Gilmore’s report makes it clear this may not be the case.

“The Services have designated 276 deficiencies in combat performance as ‘critical to correct’ in Block 3F [the F-35’s software], but less than half of the critical deficiencies were addressed with attempted corrections. Deficiencies continue to be discovered at a rate of about 20 per month,” the report added. “Flight sciences testing continues to be a source of significant discovery, another indication that the program is not nearing completion of development and readiness for IOT&E.”

Among the issues, the report cited that the “excessive vertical oscillations during catapult launches make the F-35C operationally unsuitable for carrier operations.” Unsolved structural problems were cited, such as the connection between the vertical tail and the airframe which is wearing out quickly. Earlier tests of the pilot ejection system showed a potential for serious neck injury or death for pilots who weighed less than 136 lb (62kg). Despite introduction of the lightweight helmet (Gen III Lite HMDS), the restriction remains, but if the suggested fixes are incorporated, the “Air Force may open F-35 pilot training to lighter-weight pilots (those weighing less than 136 lb) as early as December 2017,” the report says.

Maintenance issues were also cited, such as the number of panels that may have to be removed and safely stored while working on the F-35. Another issue is that “maintainers must physically connect Portable Maintenance Aid (PMA) laptops to the aircraft in order to conduct most maintenance activities.” However, software issues mean the PMA may connect in seconds or minutes causing “maintainers to disconnect a PMA they incorrectly believe is failing to connect, which prevents that PMA from connecting to an aircraft until an Automatic Logistics Information System (ALIS) administrator resets it, which can be a lengthy process.”

Among the many recommendations, Gilmore’s report says, “the Department should carefully consider whether committing to a ‘block buy’ is prudent given the state of maturity of the program, as well as whether the block buy is consistent with a ‘fly before you buy’ approach to defense acquisition and the requirements [as required by law].”
The full F-35 report from the Office of the Director, Operational Test & Evaluation, can be found here.

Tags: F-35 combat-capability could be delayed till 2020