#thenewscompany : Siliceous sand-sponge, Tetilladactyloidea– a new record from sonadia island,Bangladesh. Classification of the species is as follows based on World Porifera database.

Carter, H.J. in 1869 first discovered this species Siliceous Sand-Sponge fromthe South-east Coast of Arabia. He describes the morphometrics of the species as mammilliformes ,elongated, date shape, fixed,erect,fleshy,tough; surface smooth, above becoming hispid with recurved spines below; color reddish brown, purplish. Upper extremity obtuse,round,perforated at the point by a circular aparture or vent separated into five divisions by as many as septa extending from the circumference to the central union. Lower extremity terminating in a bundle of loose,soft,speculeferous,keratose filaments which, tending to a spiral arrangement, finally spread out root-like into the sand beneath.

In April 2017, Dr. S.M.A. Rashid and myself while conducting an ecological study of the Sonadia Island on behalf of Institute of Water Modelling (IWM) and Ministry of Power, Energy and Mineral Resources, we came across this rare soft sponges for the frst time at Sonadia island and this is first record for Bangladesh . While cruising in the inter-tidal canal inside mangrove forest, we saw the sponge bed at the sandy bottom during ebb tide. From a distance they looked like brick-red flower bed blooming in the water. We took the images of both the individual polyp and colony. We have collected specimen for its taxonomic identification. We have contacted some experts working on coelenterates and poriferafor authentic identification of the species. Scientists from the Zoological Survey of India DrKaushikDeuti and Dr J. G. Patnayak; and Dr Rob van Soest (Netherlands) were contacted for the identification of the species. After a through taxonomic review and researching the taxonomic keys, they confirmed the identification of the species as Siliceous sand-sponge, Tetilladactyloidea. 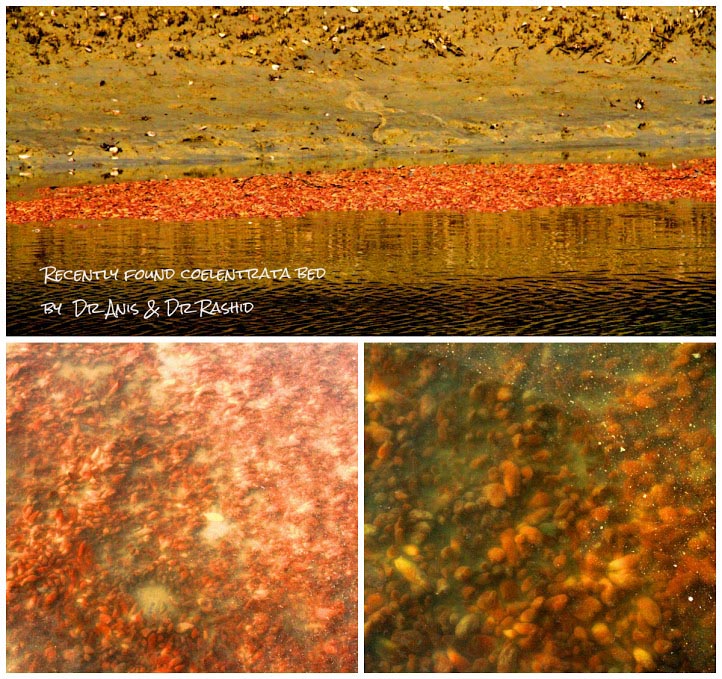 The habitat is lagoon, inter-tidal coastal wetlands with mineral rich sandy bottom. The individual polyp is anchored in the sand like a flower garden. Brilliantly bi-colored, red and yellow tubercula contain a single opening which gives its name Coelenteron. The cavity is circular and distinct. The area is also having high density of bivalve oyster mollusks. There are three beds seen stretching about a kilometer.

Later on as a follow-up a research team of Isabela Foundation visited the site twice in the second week of June, 2017 and in March 2018 to collect detailed information of the species and took underwater photographs and collected samples. Isabela team was headed by Mr.Kabir Bin Anwar, Chairperson, Isabela Foundation, Dr. Anisuzzaman Khan as Chief Scientist and supported by scuba divers. The Team dived and collected information on soil condition, water depth, water quality and habitat composition. 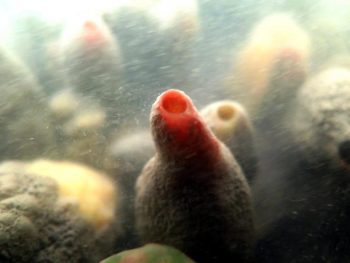 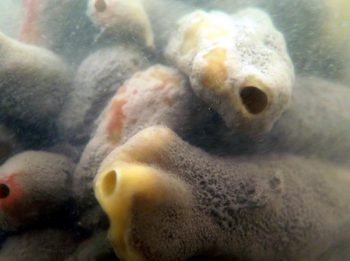 Corals belong to the Phylum Cnidaria (Coelenterata) (from the Greek meaning ‘hollow gut’), which also includes jellyfish, for example. The corals of the Madreporaria order make up the bulk of the coral world, such as those in Australia’s Great Barrier Reef and the Maldives Archipelago in the Indian Ocean.

Coral species live mainly in well-oxygenated, warm, sunlit waters of the tropics; however, some varieties can also survive in the cold, dark waters of the abyss, under the enormous pressure at depths of several kilometers.
An individual coral is known as a polyp, a soft organism comprising a base, a hollow gastro-vascular (‘stomach-vessel’) tube, and a mouth opening surrounded by tiny tentacles. The beautiful colours of coral, produced as a wonderful byproduct of the symbiotic relationship between polyp and algae.

Each polyp is hermaphrodite (i.e. having both male and female sexual organs). There are two types of sexual reproduction in coral. In ‘brooder’ corals, the egg is fertilized within the polyp, incubated and then later released into the ocean. In externally fertilizing corals, some polyps release sperm, others eggs. In the awesome phenomenon known as mass coral spawning, all the corals in one geographic region release their eggs/sperm on the same night, all synchronized by the phases of the moon.

The resultant larva (or planula) survives by drifting in the open sea as part of the surface zooplankton (microscopic floating animals). If it does not drift too far out to sea, or is not devoured by plankton-eating predators, it settles to the seabed after a few days, attaching itself to a suitable solid support.

Some polyps live alone, while others form a colony. The creation of a colony requires a second type of reproduction, called asexual ‘budding’. A new bud secretes its own skeleton alongside the parent polyp. As new polyps develop, the old ones beneath die, but the skeletons remain. 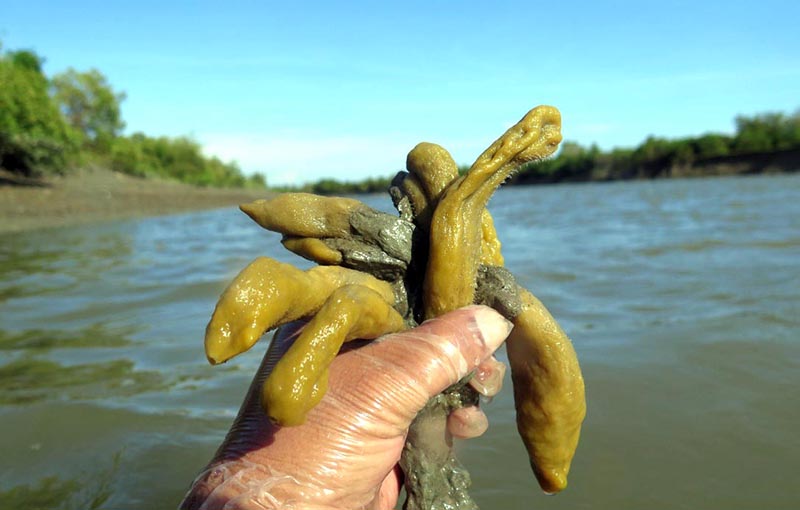 Salient features of Porifera are as follows.

• Includes marine & freshwater sponges
• Usually sessile as adults, but can move at a very slow pace (4mm per day)
• Simplest of all animals
• Hermaphrodite, sexual and asexual reproduction
• Contain specialized cells, but no tissue
• Asymmetrical
• Bodies filled with holes or pores for water circulation
• Marine sponges are larger & more colourful than freshwater sponges
• Range in size from 2 centimetres to 2 metres

Sonadia is a small island under Kutubjom union of Moheshkhali upazila of Cox’s Bazaar district of Bangladesh. The Sonadia island is about 15 kilometers away from Cox’s Bazar. Total area of the Sonadia Island is about 9 square kilometers. The island has tidal and estuarine floodplain landscapes. The land, soil and hydro logical condition of Sonadia Island is unique but quite similar to overall condition of Kutubjom union. High lands of Sonadia are just above the sea level. Low-lying areas goes under water during the high tide.

Geomorphologically, it is a barrier island. It has been formed as natural sandy breakwaters that face parallel to the flat coastlines of Maheskhali Island. Consisting of gently sloping low-lying coast unprotected from the sea by cliffs facing the ocean, it is the ideal site for such barrier island formation. In the east, a small channel a few meters wide separates Sonadia from Maheshkhali Island, while to the west shallow bays separate it by a few kilometers from the mainland. A sandy ridge extends along the island’s length from north west to south east. Winds and waves are the major forces determining the features of the dunes. Two dune ridges are recognized, one known as “Barchar” and the other, “Maghchar”, covering a relatively smaller area.

There are sandy sea beaches on three sides of the island. There are many small canals in the island. On the both sides of the canals, there are mangrove forests. Finally, the mangroves and shallow shoals formed surrounding the island provide an excellent wintering area for migratory waterfowl and shore birds, including three birds and three marine turtles that are listed as globally threatened. About 3,500 people live in the island. Majority of the inhabitants depend on fishing and agriculture for their livelihood.

Acknowledgement: The author highly acknowledged the technical support provided by Dr Kaushik Deuti and Dr J. G. Patnayak; and Dr Rob van Soest (Netherlands) for the identification of the species. The author is grateful and express his gratitude to the Institute of Water Modelling (IWM), and Isabela Foundation for their cooperation in the field work.

Thuraya Partners with T-Mobile to Launch Roaming Service in USA