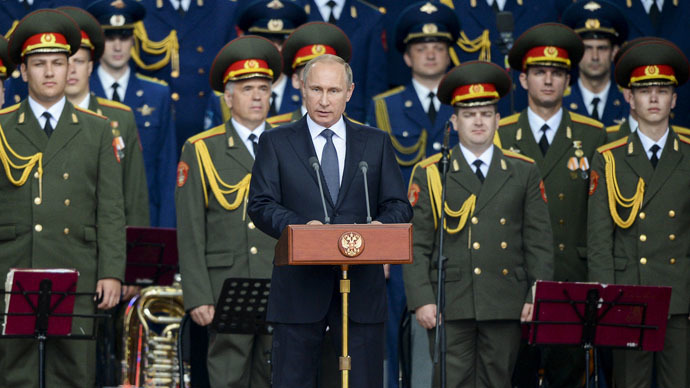 e-News® | The NEWS Company…MOSCOW, June 17, 2015 : President Vladimir Putin said Tuesday that Russia would boost its nuclear arsenal by more than 40 intercontinental missiles this year, a move branded “sabre-rattling” by NATO and “a step backwards” by Washington. The declaration from the Krmlin strongman came as Russia reacted with fury to reports that the US is planning to bulk up its military deployments in eastern Europe, adding to tensions between Russia and the West which have rocketed over the past year over the Ukraine conflict.

“This year, the size of our nuclear forces will increase by over 40 new intercontinental ballistic missiles that will be able to overcome any, even the most technologically advanced, missile defence systems,” Putin said at the opening of an exhibition of military hardware outside Moscow. The United States voiced concern and called it a retrograde move reminiscent of the Cold War.

“We’ve had enormous cooperation from the 1990s forward with respect to the destruction of nuclear weapons that were in former territories of the Soviet Union. And nobody wants to see us step backwards,” said US Secretary of State John Kerry.

“Nobody wants to — I think — go back to a kind of Cold War status.”

NATO head Jens Stoltenberg said Putin’s remarks were part of a dangerous pattern of behaviour by Moscow. “This nuclear sabre-rattling by Russia is unjustified, destabilising and it is dangerous,” Stoltenberg said. Putin said that Russia would defend itself if threatened, accusing NATO of “coming to our (Russia’s) borders”. Russia has an estimated 7,500 nuclear warheads, according to the Stockholm International Peace Research Institute, of which around 1,780 are deployed on missiles or at military bases. The United States, in comparison, has some 7,300 warheads, of which 2,080 are deployed.

Poland and other countries in Eastern Europe have been rattled by Russia’s actions in Ukraine, where it annexed the Crimea peninsula in 2014 before pro- Moscow separatists began fighting Kiev’s forces in the country’s east. Kiev and its allies accuse Moscow of sending in troops and heavy weapons to back the separatists, but Russia has denied the claims.

– Reports of US deployments –

NATO has moved to reassure Russia’s nervous Eastern European neighbours, launching US-led drills in the Baltic states and Poland earlier this month. The New York Times reported at the weekend that the Pentagon was poised to station heavy weapons for up to 5,000 American troops in several Eastern European and Baltic countries to deter Russian aggression. This would be the first time since the end of the Cold War that the US has had heavy military equipment — including battle tanks — in newer NATO members that were under Moscow’s influence in the Soviet era.

Poland said on Sunday it was in talks with the United States on Washington storing heavy weaponry on its soil. US Air Force Secretary Deborah Lee James said F-22 fighter jets could be deployed to Europe as the standoff with Moscow rumbles on, The Wall Street Journal reported Monday. Asked about Moscow and NATO both boosting their firepower in the region at a meeting outside Moscow with his Finnish counterpart Sauli Niinisto, Putin said Russia had to defend itself.

“If someone puts some of our territories under threat, that means we will have to direct our armed forces and modern strike power at those territories, from where the threat emanates,” he said. “It’s NATO that is coming to our borders, and not us moving somewhere.” But he said observers should not “blow anything out of proportion” with regard to the alleged threat from NATO. “Of course we will analyse everything, follow this carefully. So far, I don’t see anything that would force us to worry especially,” Putin said. Russia’s foreign ministry lashed out at the mooted US deployments in the region, warning that the move could “take on a life of its own”. Russia’s Deputy Defence Minister Anatoly Antonov on Tuesday accused NATO of “pushing (Moscow) towards an arms race,” state-run agency RIA Novosti reported.

Putin on Tuesday toured a vast arms fair at a site outside the capital that is set to become a “Patriot Park” which will showcase Moscow’s military might. The Russian leader, who enjoys sky-high approval ratings and has pumped vast sums into retooling Russia’s armed forces, praised the country’s military-industrial complex as a “locomotive for innovation”. Many nations across Eastern Europe are jittery over Russia’s expansionism in Ukraine. Russia has used more and more bellicose language as the standoff with the West deepened, including pointing to its nuclear arsenal. In March, Putin said that he had been ready to put the country’s nuclear forces on alert when he moved to annex Crimea last year.