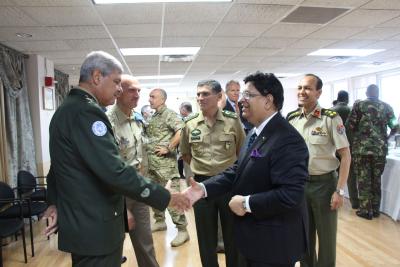 e-News® | The NEWS Company…DHAKA, June 17, 2015 :  Seventeen Force Commanders of all the current UN Peacekeeping missions attended a reception on Tuesday at the permanent mission of Bangladesh, said a release received here today. The commanders have been attending a four-day long heads of Military Component Conference titled “Performance: A Command Responsibly” that started yesterday at the UN headquarters to enhancing performance of the overall peacekeeping operations.

The permanent representative of Bangladesh to the UN Dr A K Abdul Momen said that Prime Minister Sheikh Hasina attaches a very high priority in the UN peacekeeping efforts and had responded promptly and positively to the UN’s call for more peacekeepers as a trusted partner of the UN in the field of peacekeeping.

NRB Attacked by Miscreants in the capital