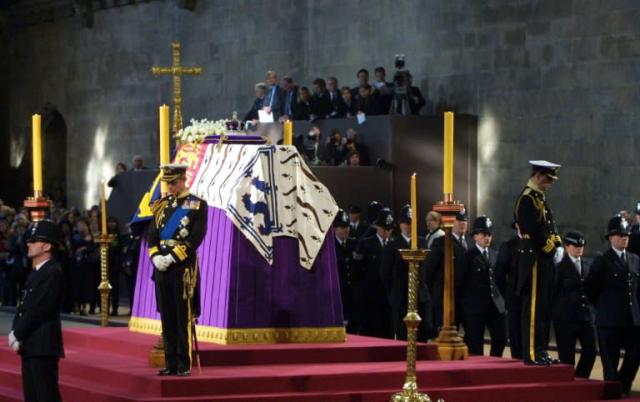 #thenewscompany : Britons have a reputation for patiently waiting in line but the queue for Queen Elizabeth II’s lying in state is likely to be unprecedented even by their standards. A huge queue is expected to stretch through the night as people pay their respects to the queen in parliament’s Westminster Hall in London this week, the British government warned.

Mourners will also face airport-style security and obey strict rules, including an edict to wear appropriate clothing and a ban on filming, taking photographs or using mobile phones. They will be allowed to file past the late monarch’s coffin non-stop from 5:00 pm (1600 GMT) on Wednesday night until 6:30 am on the morning of her state funeral on September 19.

“Please note that the queue is expected to be very long. You will need to stand for many hours, possibly overnight, with very little opportunity to sit down, as the queue will keep moving,” said the government guidelines issued on Monday.

“Please consider this before you decide to attend or bring children with you.” Around 750,000 people are expected to descend on the queen’s lying in state. The queue could stretch for five miles (eight kilometres) and the waiting time last for up to 20 hours, The Times newspaper said.

The numbers are expected to be “far more” than the 200,000 people who filed past the coffin of the queen’s mother when she died in 2002, Prime Minister Liz Truss’s spokesman said on Monday. He declined to give the overall anticipated.

Like her mother’s, Queen Elizabeth II’s closed coffin will rest on a raised platform known as a catafalque, and people will file past on both sides to pay their respects.

But it is likely to prove something of an endurance test to get that far. The government advised people to wear “suitable clothing” for the weather conditions, including either warm clothing or an umbrella if it is wet, or sunscreen if it is hot.

They should also bring food and drinks to consume in the queue as there will only be limited places to buy refreshments in line.

They are also advised to bring a portable mobile phone charger. In case people need to go to the toilet, they will be given wristbands allowing them to leave the queue for short periods, Downing Street said. Fearing that people may try to camp out while in line, the government has also banned tents or gazebos and “barbecues or fires”.

Details for the route of the queue will be released on Tuesday. When they finally reach the Palace of Westminster, mourners must pass an “airport-style security search point”. They will be given a wristband allowing them to enter the building, which they must take off when they leave.

Inside, they face a forbiddingly long list of rules. People should “dress appropriately” for the occasion and “respect the dignity of this event”, the guidelines said, adding: “Do not wear clothes with political or offensive slogans.”

Only small bags only are allowed. Large items must be left in a luggage-drop area but there is no guarantee there will be space.

Flowers, soft toys and other tributes are banned from inside the building. The government said they should instead be left in a special area in Green Park, near Buckingham Palace.

Anyone hoping to record for posterity their moment with the body of Britain’s longest-serving monarch will also be disappointed.

“You must not film, photograph or use mobile phones or other handheld devices” inside the hall, the guidelines said.