In a Samsung Galaxy far, far away … will Android still rule? 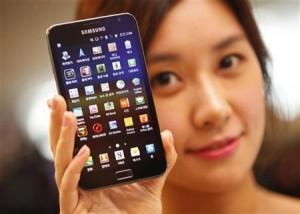 And, for some, that’s the problem.

Samsung’s meteoric rise – in the first quarter of 2011 it shipped fewer smartphones than Apple, Nokia or Research in Motion, but is now market leader – has handed it a dilemma. Does it risk becoming a commodity manufacturer of hardware, squeezed like the PC makers of old between narrowing margins and those who control the software that makes their devices run, or does it try to break into other parts of the business – the so-called mobile ecosystem?

“It comes down to this sense of what it is they want to be,” said Tony Cripps, principal analyst at Ovum. “Do they really want to be one of the power players or are they happy enabling someone else’s ecosystem?”

To be sure, Samsung isn’t in any kind of trouble, and isn’t likely to be so any time soon. Later on Thursday, it will launch the Galaxy S3, the latest addition to its flagship range of smartphones. Juniper Research expects Samsung to remain the No.1 smartphone manufacturer this quarter. The next iPhone upgrade is expected around the third quarter.

But still the company has its critics. They worry that Samsung has yet to address the central contradiction of it making devices that use someone else’s operating system. By licensing the free Android OS from Google, Samsung saves itself millions of dollars in software development costs and license fees, but leaves itself dependent on Google.

Horace Dediu, a former analyst for Nokia who now works as a consultant and runs an influential blog at www.asymco.com, said a similar debate went on at Nokia in the early years of the smartphone. The conclusion, he said, was obvious: Microsoft had shown that whoever owned the operating system could relegate every hardware manufacturer to be a commodity player.

“So it’s a puzzle to me now, years and years on,” he said, “to see companies like Samsung continuing to operate within the operating system and ecosystem that other vendors control.”

And Samsung, of course, is not alone. Nokia itself has abandoned its own operating system, Symbian, in favor of Microsoft’s Windows Phone. But the consequences for Samsung and other Android manufacturers are visible: While each has customized the Android interface, these are “veneers”, in the words of Dediu, which “dissolve as soon as you jump into an application of the core platform.”

These tweaks also contribute to what is called “fragmentation”. As Google rolls out updates to its operating system, they must first be tested and adapted by manufacturers against their own customizations before being pushed out to the handset. This slows down the update process and means many users are stuck with earlier versions of Android. Nearly two thirds of Android devices, for example, run Gingerbread, a version of the operating system that was released in late 2010.

This further weakens Samsung’s efforts to differentiate its phones beyond merely the look and hardware specifications. Analysts say Google’s efforts to reduce fragmentation by limiting what can be altered in more recent versions of Android compounds such problems. Also, smartphones look increasingly similar as they shift from keyboards to touchscreens.

All this creates a conflict of interest between the two players that at some point may burst into the open. While Samsung says it has welcomed Google’s purchase of Motorola, a handset maker, because of the U.S. firm’s commitment to supporting Android and its partners, it has also taken steps towards some degree of independence.

For example it last year introduced its own Android software store, Samsung Apps, which has about 40,000 apps – a handful compared to Apple’s 500,000 for the iPhone and 450,000 for Android. And last month it announced its own mobile advertising service, AdHub Market, apparently competing with Google’s own ad distribution network – its main source of revenue.

FOR BADA OR WORSE?

And while all but a fraction of Samsung’s smartphones are currently Android devices, the South Korean group has said it is committed to creating devices for different operating systems – what it calls a multi-platform strategy. Analysts said this has so far been half-hearted.

It has an operating system called bada, for example, which was on fewer than 3 percent of the world’s smartphones last year, according to Canalys, putting it ahead of Microsoft’s Windows Phone. But that’s nothing compared to Android, which was on nearly half of all smartphones shipped. “They’ve tried to beat the drum for bada, but it hasn’t had much traction,” said Jake Saunders, a Singapore-based analyst for ABI Research.

Samsung says it plans to introduce more models, but has also said it may roll bada into another operating system called Tizen, and is in any case building an ecosystem that would improve compatibility between the two systems. It was keen to stress, however, that while Android was an important part of its strategy, phones running Windows and bada operating systems were equally important. Given that bada and Windows phones account for less than 5 percent of Samsung’s total phone shipments, it suggests Samsung will give greater weight to Windows and bada phones in the months ahead.

But these are small steps given the scale of Samsung’s dependence on Android. Samsung, said Ovum’s Cripps, is keenly aware of the need to shape a broader strategy. “Especially in the last year there’s been quite a lot of thought internally about which way they go with this.”

If it wants to avoid merely competing at the bottom end of the market with ZTE and Huawei, analysts agreed it must develop an ecosystem that embraces software, content, other devices and all the players that help make that happen. This would inevitably pit it against Apple, Amazon, Google and Microsoft. All have different business models, said Cripps, but the same goal: to “own every element of the consumer’s online and mobile experience.”

In some ways, Samsung is well positioned for this.

“Samsung is not just a phone maker like HTC so it does have the potential to create platforms which deliver content and web services to TVs, PCs, phones and media players, and connect them,” said Caroline Gabriel, research director at Rethink Technology Research.

This is Samsung’s competitive advantage, said Gabriel, as the world shifts more to web-based technologies like HTML5, which reduce the relevance of individual operating systems and platforms like Apple’s iOS and Android. Instead, applications will be more like web pages, which can run on any device.

Samsung can draw on its extensive supply chain, manufacturing capability and research and development facilities to make this happen, Gabriel noted, but its challenge is to overcome silo-like systems within the company and to learn how to develop relationships with the outside world.

“Samsung has no track record of building a developer ecosystem and even in the web that’s going to be a challenge,” she said. “It may have thought Google would be a solution, but Google is too controlling.”

It also requires deeper changes, said Ovum’s Cripps – not only to be the first Japanese or Korean company to break into a world dominated by U.S. players, but to succeed where once- dominant players like Nokia, RIM and Microsoft have stumbled. “I can well understand any doubts they may have internally about how they should push ahead with this,” he said. “It is genuinely very, very difficult.”

Samsung has made some tentative steps, for example into wedding its Smart TV business into partnerships with content providers. And developers like Singapore-based Jon Petersen say the company has put out feelers to outsiders to help work on software applications – in apparent recognition of its own weaknesses. Such weaknesses were visible even with the app it published ahead of Thursday’s S3 launch: nearly a third of reviewers gave it the lowest rating, complaining it didn’t work properly.

For now, no one denies Samsung’s pre-eminence.

“The zeitgeist right now is definitely towards high-end Android devices of which Samsung is clearly the leader so I don’t think there’s any instant danger,” said Cripps. “It’s more a case of what Samsung wants to be in five years’ time and planning towards that.”

Lego-Inspired iPhone 5 Cases Will Make You Geek Out

US condemns shelling of UN school in Gaza