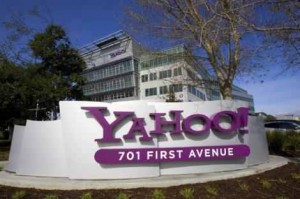 The troubles at Yahoo Inc are proving to be a headache for AOL, that other deeply challenged Internet company trying to turn around its fortunes.

Interest in AOL from private equity firms ramped up after the company’s stock plummeted about 30 percent on dismal earnings results last month. Allen & Co and Bank of America Securities are advising AOL on strategic alternatives, including a possible sale, sources said.

Problem is, the private equity firms have now turned their attention to Yahoo, which is reportedly seeking its own sale after firing Chief Executive Carol Bartz on September 6 and attracting the ire of activist investor Daniel Loeb.

Sources said the top-tier private equity firms that were looking at AOL are now setting their sights on the company famous for its purple logo and peppy exclamation point, viewing it as more valuable and housing more attractive assets than AOL.

“Yahoo has jumped to the forefront,” said one industry source familiar with the situation.

Indeed, according to this industry source and one other source, several PE firms have lines out to at least two media companies to see if they are willing to partner on a bid for all or pieces of Yahoo. Both sources declined to name the PE firms or media companies.

AOL and Yahoo are two vastly different business in terms of market value — roughly $1.6 billion and $19 billion respectively — meaning that there are different pools of potential buyers for each asset. The big private equity firms with massive amounts of money under management are able to go after Yahoo on their own or with a strategic partner. The smaller private equity firms are better equipped to digest AOL and likely couldn’t pursue Yahoo absent being part of a consortia of buyers.

Or, to put it another way, AOL’s second-class assets are now only attracting the interest of second-tier buyers.

Indeed, only when compared to AOL does Yahoo come out the winner.

“They are both in rough shape, but AOL has more structural challenges than Yahoo,” said Ross Sandler an analyst with RBC Capital Markets.

Compounding AOL’s problems is the fact that its lucrative subscriber dial-up business is also one of greatest liabilities. Sandler said dial-up is partly responsible for a 25 percent year-on-year decline in AOL’s free cash flow.

“At Yahoo you don’t have those issues,” he said.

To make up for the loss of subscription revenue, AOL is training its sights on advertising sales. But even that is having set backs. Its launch last September of a more expensive large ad-format with interactive panels that dominate a Web called Project Devil is still trying to gain traction on Madison Avenue.

Under Armstrong, AOL has also developed a penchant for investing in projects that have yet to pay out.

Case in point: Patch.com. AOL has shoveled roughly $160 million into the network of more than 800 neighborhood-oriented websites dedicated to local news, many of which are less than a year old. Yet Patch is on track to lose $140 million to $150 million this year, estimates Sandler.

Though expensive, at least AOL’s attention-grabbing acquisition of the Huffington Post for $315 million is delivering returns since the business is profitable.

Yahoo’s coming on the block couldn’t have come at a worse time for Armstrong. The former Google Inc ad sales executive has seen his reputation dented since taking over AOL. According to one of the industry sources, Armstrong’ reputation has taken as much of a hit as Bartz’s, even before he bungled the dust-up that resulted in TechCrunch founder Michael Arrington’s ouster.