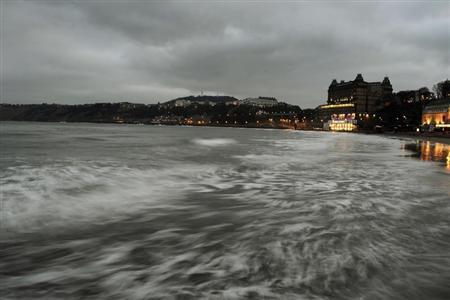 Climate change could get worse quickly if huge amounts of extra heat absorbed by the oceans are released back into the air, scientists said after unveiling new research showing that oceans have helped mitigate the effects of warming since 2000.

Heat-trapping gases are being emitted into the atmosphere faster than ever, and the 10 hottest years since records began have all taken place since 1998. But the rate at which the earth’s surface is heating up has slowed somewhat since 2000, causing scientists to search for an explanation for the pause.

Experts in France and Spain said on Sunday that the oceans took up more warmth from the air around 2000. That would help explain the slowdown in surface warming but would also suggest that the pause may be only temporary and brief.

“Most of this excess energy was absorbed in the top 700 meters (2,300 ft) of the ocean at the onset of the warming pause, 65 percent of it in the tropical Pacific and Atlantic oceans,” they wrote in the journal Nature Climate Change.

Lead author Virginie Guemas of the Catalan Institute of Climate Sciences in Barcelona said the hidden heat may return to the atmosphere in the next decade, stoking warming again.

“If it is only related to natural variability then the rate of warming will increase soon,” she told Reuters.

Caroline Katsman of the Royal Netherlands Meteorological Institute, an expert who was not involved in the latest study, said heat absorbed by the ocean will come back into the atmosphere if it is part of an ocean cycle such as the “El Nino” warming and “La Nina” cooling events in the Pacific.

She said the study broadly confirmed earlier research by her institute but that it was unlikely to be the full explanation of the warming pause at the surface, since it only applied to the onset of the slowdown around 2000.

The pace of climate change has big economic implications since almost 200 governments agreed in 2010 to limit surface warming to less than 2 degrees Celsius (3.6 F) above pre-industrial levels, mainly by shifting from fossil fuels.

Surface temperatures have already risen by 0.8 C. Two degrees is widely seen as a threshold for dangerous changes such as more droughts, mudslides, floods and rising sea levels.

Some governments, and skeptics that man-made climate change is a big problem, argue that the slowdown in the rising trend shows less urgency to act. Governments have agreed to work out, by the end of 2015, a global deal to combat climate change.

Last year was ninth warmest since records began in the 1850s, according to the U.N.’s World Meteorological Organization, and 2010 was the warmest, just ahead of 1998. Apart from 1998, the 10 hottest years have all been since 2000.

Guemas’s study, twinning observations and computer models, showed that natural La Nina weather events in the Pacific around the year 2000 brought cool waters to the surface that absorbed more heat from the air. In another set of natural variations, the Atlantic also soaked up more heat.

“Global warming is continuing but it’s being manifested in somewhat different ways,” said Kevin Trenberth, of the U.S. National Center for Atmospheric Research. Warming can go, for instance, to the air, water, land or to melting ice and snow.

Warmth is spreading to ever deeper ocean levels, he said, adding that pauses in surface warming could last 15-20 years.

“Recent warming rates of the waters below 700 meters appear to be unprecedented,” he and colleagues wrote in a study last month in the journal Geophysical Research Letters.

The U.N. panel of climate scientists says it is at least 90 percent certain that human activities – rather than natural variations in the climate – are the main cause of warming in recent decades.