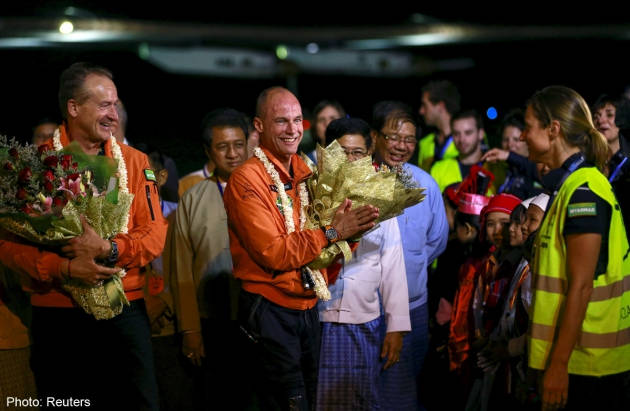 e-News® | The NEWS Company…YANGON, March 20, 2015 : Solar Impulse 2 was met by dancers dressed in an elephant costume as it landed in Myanmar’s second largest city Mandalay, completing the fourth leg of its landmark circumnavigation of the globe powered solely by the sun.

The single-seater aircraft touched down at 7:51 pm (1321 GMT) Thursday, several hours earlier than expected, after a 13-hour journey from the Indian holy city Varanasi, cut short thanks to strong tail winds. Pictures showed the plane being met by two men dressed as a brightly coloured elephant, backed by a huge crowd of local dancers.

Pilot Bertrand Piccard flew the fourth leg of the 12-part journey, taking over from fellow Swiss aviator Andre Borschberg. “A moment I will remember: touch down in #Myanmar,” Piccard tweeted shortly after landing.

“It was fabulous to have my wife Michèle and my daughter Estelle by my side at the landing in #Mandalay,” he added in a later post.

The Swiss adventurer had previously visited Myanmar in 1998 during another attempted round-the-world trip in the Breitling Orbiter 2 balloon. At the time Myanmar was still governed by a brutal and isolationist junta. But in 2011 outright military rule was replaced by a quasi-civilian government and Myanmar has since embarked on a series of reforms, prompting a flood of foreign investment.

Infrastructure in the impoverished southeast Asian nation however remains limited, and the Solar Impulse team needed to erect an enormous inflatable mobile hanger at Mandalay airport to house the plane during its stopover. It is the first time the hanger has been used during the round-the-world trip.

The Solar Impulse team said they expected the aircraft to remain in Myanmar at least two days before heading to China’s Chongqing for the next leg, pending favourable weather conditions. The trip from Varanasi was expected to take around 20 hours, but strong tail winds pushed the plane up to record-breaking speeds.

“This flight broke a record in terms of speed going up to 117 knots pushed by tail winds,” an update by the team on YouTube said.

The plane had stopped overnight in Varanasi after leaving Ahmedabad in Gujarat state, where the pilots became entangled in India’s notorious bureaucracy, delaying its departure by five days. The team behind Solar Impulse 2, which has more than 17,000 solar cells built into its wings, hopes to promote green energy with the circumnavigation attempt.

Ridiculed by the aviation industry when it was first unveiled, the venture has since been hailed around the world, including by UN chief Ban Ki-moon. Muscat was the first of the 12 planned stops on the plane’s maiden journey around the world from Abu Dhabi, with a total flight time of around 25 days spread over five months.

Tags: " Piccard tweeted shortly after landing."A moment I will remember: touch down in #Myanmar000 solar cells built into its wingsJumbo welcome for Solar Impulse plane in Myanmarmore than 17Myanmar's second largest city MandalayPilot Bertrand Piccardpowered solely by the sun.Solar Impulse 2