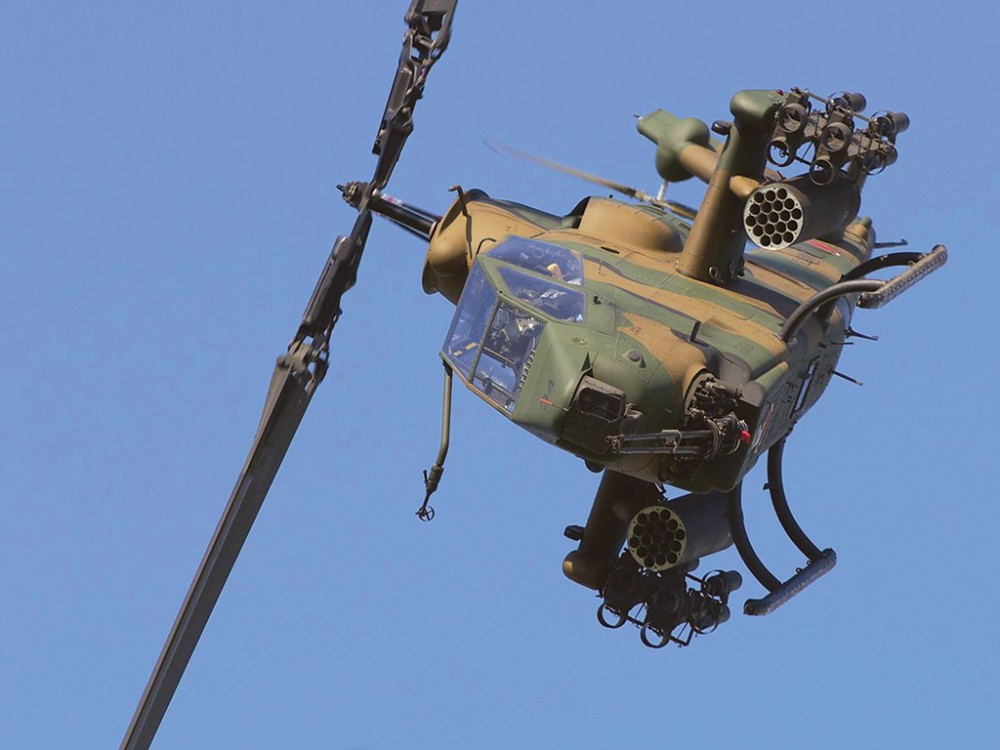 e-News® | The NEWS Company…Munich, October 15, 2015 : BLR wants to give Bell’s attack helo a new lease on life, With its tandem cockpit, stub wings and narrow set fuselage, Bell’s AH-1 Cobra set the design precedents followed by virtually every attack helicopter that followed. And while it was retired from the U.S. Army service in favor of Boeing’s AH-64 Apache, the Cobra is still in widespread frontline use across the world, notably in the Asia-Pacific region, where large numbers remain in service in Japan and South Korea, as well as with Bahrain, Jordan, Pakistan and Turkey in the Middle East.

However, without the backing of the U.S. Army, there are few real options to upgrade these still potent machines, which is why many Cobra operators are replacing the helicopter. Turkey selected the locally produced TAI T129 ATAK, while Pakistan is buying a mix of new-generation AH-1Z Venoms and Russian Mi-35 “Hinds,” as well as evaluating China’s Z-10. Now U.S.-based BLR Aerospace says it has developed a compelling upgrade that could breathe new life into the world’s remaining Cobra fleets.

“Some operators of the Cobras are having to make a trade-off between gas and bullets,” Dave Marone, BLR’s vice president for marketing, told Aviation Week at the Helitech exposition in London this month.

Marone says several operating nations are beginning to bump up against the life of their airframes but do not have the money to replace their helicopters. He suggests that BLR’s upgrade could be compelling to the remaining operators facing issues with Cobra’s airframe, improving the type’s performance and increasing its lethality—increased payload capability allows it to carry more weaponry for longer. BLR holds the restricted category type certificate for the AH-1 and plans to make improvements to the rotorcraft, including upgrading it with BLR’s FastFin, a system already on 900 helicopters worldwide that improves anti-torque capabilities, along with strakes fitted along the tail boom to redistribute airflow around the rear of the aircraft.

Internally, the helicopter’s oil-cooling system uses bleed air off the engine compressor, but this increases the temperature of the engine, pushing it closer to its thermodynamic limits. BLR plans to use an electrical system to cool the oil, which it says will help increase engine output. The rotorcraft’s engine particle separation system, which also uses engine power, will be replaced by an inlet barrier filter. Marone says these changes alone could add 1,000-1,500 lb. of payload capacity in some conditions, offering an increase in endurance or weapons load.

In an unusual move, BLR is also offering to undertake structural modifications. It proposes a new load beam—what Marone calls the backbone of the helicopter—produced from new materials. Other changes that could reduce empty weight still further would include the option of a new glass cockpit with large digital, multifunction displays, he says.

BLR is so confident in the upgrade program that it is modernizing a former U.S. Army TH-1P to demonstrate it. Marone says the helicopter should be ready to fly in early 2016. Customers could send their rotorcraft to the U.S. for modification, or BLR could modify helicopters from the boneyard and then sell them to existing AH-1 operators. BLR is also looking at a kit option that would enable customers to do some of the work in-country. The equipment will be subject to U.S. International Traffic in Arms Regulations and export controls. Marone says the upgrade could apply to all versions of the Cobra, even the twin-engine Super Cobras in use with the U.S. Marine Corps and Taiwan, but both operators are replacing the type with the new AH-1Z Viper or the AH-64 Apache.

The upgrade likely will appeal more to operators of the single-engine versions. The U.S. State Department has always been sensitive about sales of the Cobra. In recent years, it has vetoed transfers of the helicopter to Nigeria, which had hoped to use the type in its ongoing operations against the Boko Haram Islamic militant group. The department has also denied sales to overseas private operators that wish to display de-militarized versions of the helicopter at air shows.

In July it emerged that Israel had transferred some of its retired Cobras to the Jordanian armed forces to supplement those Jordan is using against the threat of Islamic State militants on its northern borders. Jordan has shelved plans to buy Boeing’s AH-6i, citing budgetary issues, which means the Cobras may fly on for years to come.