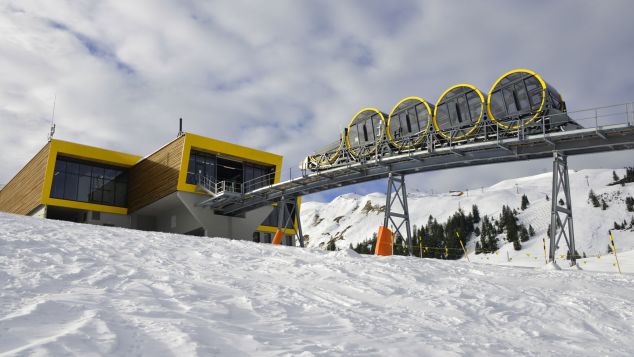 #thenewscompany — It looks like a string of giant hamster wheels, but the world’s steepest funicular railway is being hailed for its revolutionary design. The cabins on the 52 million-Swiss franc ($52.6 million) funicular in the Swiss alpine resort of Stoos resemble rotating drums that keep passengers level as the gradient changes. The 1,720-meter track will run from the valley floor near Schwyz to car-free Stoos, which sits on a lofty plateau beneath the Fronalpstock mountain at 1,300 meters (4,300 feet) near Lake Lucerne.

The track, which travels through the mountainside for part of its journey, rises 743 meters along gradients as steep as 110%. Each of the four cabins can carry 34 people at a speed of 10 meters per second. The line replaces an older funicular which had been in operation since 1933.

“After 14 years of planning and building, everyone is very proud of this train,” said Ivan Steiner, a spokesman for the railway, which opens to the public Sunday. The previous steepest funicular was the Gelmerbahn, with a gradient of 106%, which climbs to the Gelmersee lake in the Bern region of Switzerland.