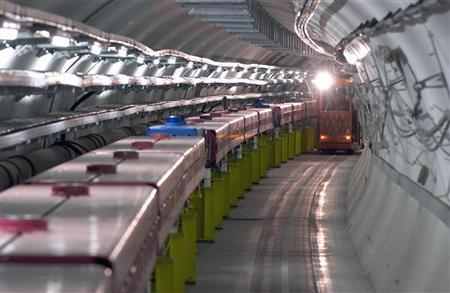 An international team of scientists in Italy studying the same neutrino particles colleagues say appear to have travelled faster than light rejected the startling finding this weekend, saying their tests had shown it must be wrong.

The September announcement of the finding, backed up last week after new studies, caused a furor in the scientific world as it seemed to suggest Albert Einstein’s ideas on relativity, and much of modern physics, were based on a mistaken premise.

The first team, members of the OPERA experiment at the Gran Sasso laboratory south of Rome, said they recorded neutrinos beamed to them from the CERN research center in Switzerland as arriving 60 nanoseconds before light would have done.

But ICARUS, another experiment at Gran Sasso — which is deep under mountains and run by Italy’s National Institute of National Physics — now argues that their measurements of the neutrinos energy on arrival contradict that reading.

In a paper posted Saturday on the same website as the OPERA results, arxiv.org/abs/1110.3763v2, the ICARUS team says their findings “refute a superluminal (faster than light) interpretation of the OPERA result.”

They argue, on the basis of recently published studies by two top U.S. physicists, that the neutrinos pumped down from CERN, near Geneva, should have lost most of their energy if they had travelled at even a tiny fraction faster than light.

But in fact, the ICARUS scientists say, the neutrino beam as tested in their equipment registered an energy spectrum fully corresponding with what it should be for particles traveling at the speed of light and no more.

Physicist Tomasso Dorigo, who works at CERN, the European Organization for Nuclear Research, and the U.S. Fermilab near Chicago, said in a post on the website Scientific Blogging that the ICARUS paper was “very simple and definitive.”

It says, he wrote, “that the difference between the speed of neutrinos and the speed of light cannot be as large as that seen by OPERA, and is certainly smaller than that by three orders of magnitude, and compatible with zero.”

Under Einstein’s 1905 theory of special relativity, nothing can travel faster than light. That idea lies at the heart of all current science of the cosmos and of how the vast variety of particles that make it up behave.

There was widespread skepticism when the OPERA findings were first revealed, and even the leaders of the experiment insisted that they were not announcing a discovery but simply recording measurements they had made and carefully checked.

However, last Friday they said a new experiment with shorter neutrino beams from CERN and much larger gaps between them had produced the same result. Independent scientists said however this was not conclusive.

Other experiments are being prepared — at Fermilab and at the KEK laboratory in Japan — to try to replicate OPERA’s findings. Only confirmation from one of these would open the way for a full scientific discovery to be declared.