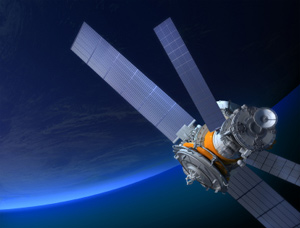 An unmanned Delta 4 rocket blasted off from Cape Canaveral Air Force Station on Friday to put a multi-use, broadband communications satellite into orbit for the U.S. military.

Perched on top of the rocket was the fifth member of the Wideband Global SATCOM, or WGS, satellite network, which provides the U.S. military, national leaders and allies with high-capacity broadband communications.

The satellites also can be used by remotely piloted aircraft, or drones, and other users simultaneously.

“One WGS satellite has the equivalent capacity of the entire legacy system,” David Goldstein, deputy director of military satellite communications at Los Angeles Air Force Base, said during a launch webcast.

The $342 million spacecraft, built by Boeing>, is expected to be joined by five more WGS satellites over the next several years.

Friday’s launch was the 71st successful flight since the company was formed in December 2006.

The company hasn’t flown a Delta 4 since a problem surfaced during a launch in October. That rocket’s satellite, another GPS, successful reached its intended orbit despite a leak in the rocket’s upper stage engine.

Amnesty slams US & allies for weapons falling into ISIS’ hands

Apple gets OK to use Swiss railway clock design