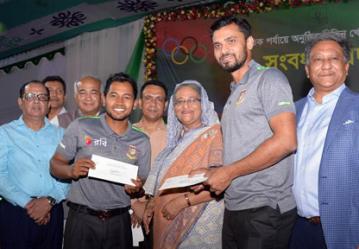 #thenewscompany : Ganabhaban, the official residence of Prime Minister Sheikh Hasina, resounded with the presence of the huge number of sports celebrities this evening as the premier honoured them through a gala reception.

On the occasion of Bangla Nababarsha 1424, the prime minister accorded the reception to the country’s leading athletes who brought laurels for the nation at the international level over the past six months.

As many as 339 athletes, coaches and officials attended the over one-hour long programme.

The Bangladesh Cricket Board gave the money to the Bangladesh cricket team for their stunning performance against Sri Lanka.

The prime minister also handed over Taka one crore each to Bangladesh Hockey Federation and Bangladesh Swimming Federation. Bangladesh Cricket Board recently pledged to give the money as donations to the two federations.

She also gave Tk 10 lakh to Bangladesh Under-16 Women Team which became champion in AFC Regional Championship held in Dhaka in August last. The BCB gave this donation to the Under-16 Women Football Team.

Skipper of the team Sabina Khatun and coach Golam Rabbani Chotaan received the cheques from the prime minister.

Speaking on the occasion, the prime minister congratulated the players and officials of Bangladesh sports teams and said that the government will do everything necessary for the development of sports and games in the country.

“Our Awami League government would continue to do whatever necessary for the flourish of sports and games,” she added.

Putting emphasis on practising sports and games side by side with education, Sheikh Hasina called upon the well-off people to supplement the government’s efforts for promotion of sports and games.

“The flourish of sports and games is not possible singlehandedly, rather government and private sponsorship is very much necessary,” she said.

The premier said that although the athletes of Bangladesh have earned many successes, but they would have to go a long way.

She also opined that those who are very much associated with the country’s sporting arena have notable contributions towards placing the country into a dignified position in the global arena.

Sheikh Hasina expressed her heartfelt thanks to the players for their contributions to the sporting arena and greeted them on the Bangla Nababarsha.

The prime minister said that she has provided incentives to the players as Bengali Nababarsha who have further brightened the image of Bangladesh in global arena through various sporting disciplines.

Pointing out that practise of sports cultural activities are very much essential alongside education in the lives of juvenile and youths, she said otherwise no nation could properly build up.