PM for multipurpose use of tea 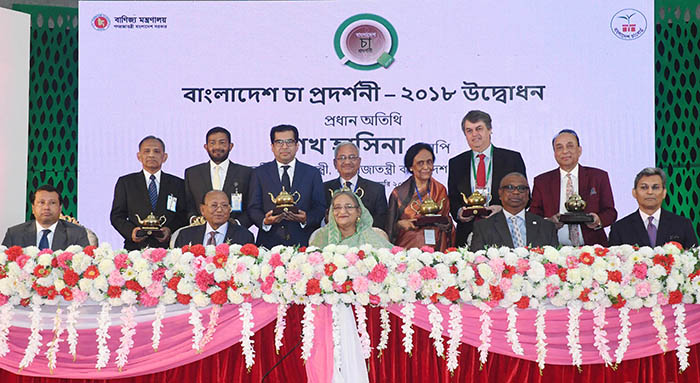 #thenewscompany – Prime Minister Sheikh Hasina today suggested multipurpose use of tea apart from being just as a popular healthy drink saying, the government wants Bangladesh tea to go on across the world.

“We can produce soap, shampoo, lotion from tea which are getting huge popularity in the whole world,” she said inaugurating Bangladesh Tea Expo in city’s International Convention City Bashundhara (ICCB) this morning.

The premier said scopes for multipurpose use of the things that remain left after the processing of tea which should commercially be explored and “we want Bangladesh’s tea to take a place in entire globe and be developed further”.

Sheikh Hasina noted with appreciation that apart from the traditional ones “satkora tea”, “tulsi tea”, masala tea and ginger tea are being produced in the country while “the Tea Research Institute is (also) conducting research to produce cola from tea”.

The premier urged researchers to innovate new tea varieties including drought-tolerant one side by side with boosting its production.

“I hope our researchers would be able to innovate more developed verities of tea alongside finding ways to increasing tea production,” she said.

Sheikh Hasina said as the premier she included tea in her gift items and stressed on making more attractive packets for its sustainable preservation as a gift item and make them “attractive in foreign countries”.

“I’ve included the tea in my gift item for foreign dignitaries . . . I would like to tell the tea garden owners that I’m doing advertisement of their tea,” she said. Sheikh Hasina appreciated that tea is being produced through organic method by not using chemical fertilizers and pesticides while Bangladeshi gardens were also producing green tea and orthodox tea alongside the CTC black tea.

The prime minister said innovativeness has come in packaging and marketing of tea and different companies are marketing tea in attractive packet, cylinder and tea bags. This value added tea is being exported to different countries at a higher price, she said. Sheikh Hasina said Bangladesh Tea Research Institute has been carrying out research to raise quality and production of the tea.

“The institute is conducting research on the flavoured tea and innovating new ways to check pesticides,” she said. Pointing out that the aim of the government is to improve the living standard of the underprivileged community, the prime minister called upon the tea garden owners to give focus on the wellbeing of the tea labourers.

“I would like to tell the (tea) garden owners to give special attention to the wellbeing of those who pluck tea leaves and give labour to their gardens,” she said. Simultaneously, she requested the tea labourers to work with utmost sincerity and take care of the gardens through which they earn their livelihood.

The premier mentioned that garment owners are taking loans from the government’s Housing Fund at two percent service charge to construct dormitories for the RMG workers. “We’ll also provide loans to the tea garden owners at the same rate if they build houses for the tea labourers,” she said.

Recalling contributions of Father of the Nation Bangabandhu Sheikh Mujibur Rahman to the development of the tea industry, Sheikh Hasina said Bangabandhu was the first Bangalee chairman of the Tea Board from 1957-1958.

At his direct instructions, the Tea Research Institute was established at Srimangal in Moulvibazar in 1957 and the office of the Tea Board was set up in Dhaka’s Motijheel, she said.

The prime minister said the Father of the Nation gave permission to the tea garden owners to preserve the ownership of lands up to 100 bighas. Bangabandhu also gave citizenship and voting rights to tea workers and the tea has become the second main export product due to his epoch-making steps, she said.

The prime minister said her government after assuming office in 1996 started work for the development of the tea industry. “At that time we undertook the Small Tea Cultivation Project,” she said.

She said the government in 2016 took a master plan titled the “Development Roadmap: Bangladesh Tea Industry”. According to the plan, we have taken short, mid and long-term development plan,” she said.

The prime minister said the country’s tea production in 1970 was only three crore kilogrammes. But the tea production now stood at 8.50 crore kgs due to implementation of the short-term development plan, she mentioned.

Sheikh Hasina said the country’s total tea production will be increased to nearly 14 crore kgs in 2025 if the present trend continues and through the mid and long-term plans. The premier said the government has set up a welfare fund for the tea workers apart from ensuring their housing, education and health facilities.

At the function, she released a clone variety (BT-21) of tea and laid the foundation stone of 30-storey “Bangabandhu Cha Bhaban” in city’s Motijheel. The prime minister also handed over awards to the garden owners who secured first position in seven categories for their outstanding contributions to the development of the country’s tea industry.

Tags: PM for multipurpose use of tea

Inside the fall of BlackBerry: How the smartphone inventor failed to adapt

Remote Assistance to see another computer