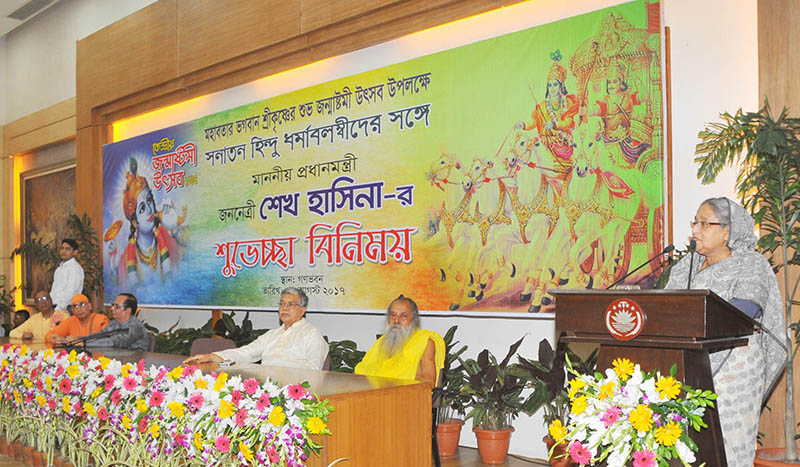 #thenewscompany : Prime Minister Sheikh Hasina yesterday expressed her doubt as to whether those, who deny the contributions of Bangabandhu to the Liberation War, believe in the country’s independence.

“Yahya Khan declared Bangabandhu as the only enemy of Pakistan and put him in the dock for trial for declaring independence. So I’m in doubt as to whether those who could not realize this truth believe in the country’s independence,” she said.

The Prime Minister made the remark while exchanging views with leaders of the Hindu community at her official Ganobhaban residence here this afternoon on the occasion of Janmashtami.

She said when Father of the Nation Bangabandhu Sheikh Mujibur Rahman declared country’s independence on March 26 in 1971, the then Pakistani President not only arrested Bangabandhu, but also blamed only Bangabandhu for it.

Sheikh Hasina said Yahya Khan in his address on March 26 didn’t mention the name of any other leaders except Bangabandhu. He put signature on the verdict of the execution of Bangabandhu through a farcical trial, she said.

At the outset of the function, a minute’s silence was observed as a mark of respect to the memories of Father of the Nation Bangabandhu Sheikh Mujibur Rahman and other martyrs of the August 15 carnage.

The prime minister said Bangabandhu could have made Bangladesh a developed and prosperous country had the tragic incident of August 15 not occurred. Bangabandhu sustained torture and repression considering the welfare of the poor and the people in distress.

Sheikh Hasina said her party believes in non-communal spirit and urged the people of all faiths to live in dignity in the country and celebrate all festivals in festive mood.

In this connection, the premier assured the people of all religions of continuing her government’s assistance.

“AL had always stood beside the oppressed people and will continue to do so,” Sheikh Hasina added.

The prime minister said the people of all faiths celebrate any festival together. “It’s our culture, tradition and rules,” she said.

The Prime Minister recalled that during the War of Liberation, people from all faiths fought shoulder to shoulder and thus liberated the country. “People from all faiths have equal rights in this independent country, and scope has been created in the constitution to freely exercise all religions.”

She said that Bangladesh is a country of communal harmony and Father of the Nation Bangabandhu Sheikh Mujibur Rahman had gifted us such a country.

But, after the assassination of Bangabandhu with most of his family members in 1975, military dictators Ziaur Rahman and HM Ershad had perpetrated oppression on the minority communities.

In this connection, she recalled that during the attack on Babri Mosque in India in 1992, the BNP men had attacked the Hindu community in the country and burnt out some 352 temples. “But, we then stood beside them,” she said.

In the same way, the BNP-Jamaat unleashed oppression on the minority community after the 2001 general election resorting to killing, torture, rape, looting and the Hindu community had to go under severe wrath of the BNP-Jamaat men.

Sheikh Hasina said her government does not want to see any recurrence of attack on the minority community saying, “People from all faiths are the citizens of Bangladesh and they would live here with equal rights and that’s what I believe … Islam also speaks of equal rights of people.”

Sheikh Hasina said it is the aim of her government that everyone would perform their religious rituals independently without the interference of others.

“We believe that everyone would perform their respective religion peacefully and only AL could maintain such environment when it remains in power,” she said adding that it is the culture of the country that the people of all faiths would equally take part in a festival no matter which religion it belongs to.

The Prime Minister said her government always wants that a nice environment prevails in the country and there would be no recurrence of torture and repression on the people.

“But, the character of BNP-Jamaat is attack, torture and oppression,” she said.

Extending her heartfelt greetings to the Hindu community on the eve of Janmastami, she expressed her firm hope that Bangladesh would be turned into a prosperous and developed country imbued with the spirit of the War of Liberation while the people of Bangladesh would enjoy all the democratic and constitutional rights.