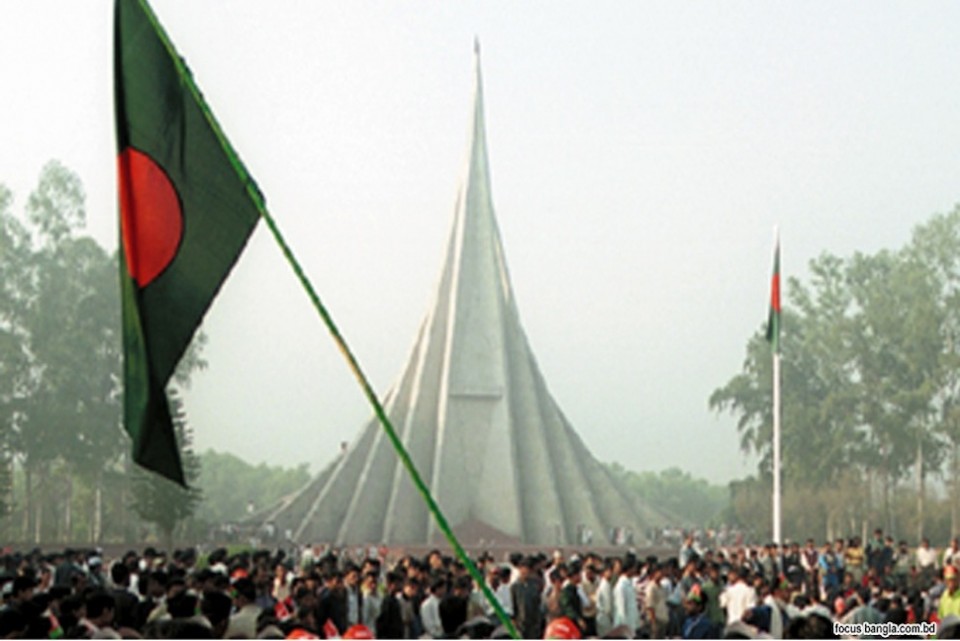 The Prime Minister accompanied by her cabinet colleagues, sung the national anthem in perfect agreement and harmony with thousands reawakening the sprit of independence in people particularly new generation.

It was a Guinness Book Records programme of singing the national anthem together by highest number of people in any part of the world in which more than 2.54 lakh people participated.

Ministry of Cultural Affairs with cooperation of the Armed Forces Division arranged the event marking the 44th Independence and National Day to renew the patriotic and national spirit and zeal in Bengalee people that they had showed in 1971 to liberate the country.

Written and composed by Biswakobi Rabindranath Tagore, Amar Sonar Bangla is a pioneer song in the cultural and political movement of Bangalee people against subjugation.

Father of the Nation Bangabandhu Sheikh Mujibur Rahman adopted the song as the national anthem of newborn Bangladesh as it meant to renew the unified spirit of Bengalee people to raise consciousness for freedom, patriotism and native land.

In her short speech on the occasion, the Prime Minister urged all to rekindle the spirit of War of Liberation in people particularly in new generation, saying our succeeding generations would carry forward the spirit to materialize the dream of martyrs of independence.

She evoked and eulogized the role of Bangladesh’s national anthem in shaping country’s history, traditions and struggles of people saying, “We express our love to our motherland, people and nature through our national anthem”.

“Our national anthem ignite our sense and stir up our emotion,’ she said, adding, “today’s event of singing the national anthem by highest number of people, would remain as a history of Bangalees, creating a record of our nationalistic spirit and patriotism.”

The Prime Minister said Bangalees are a nation of creating history. They made history while being liberated through a ceaseless struggle of 24 years under the leadership of Bangabandhu.

They also have history of loving the motherland, people and nature, which has been reflected in their national anthem, she said.

Sheikh Hasina said Bangladesh was born for prosperity of her people. The nation would march forward to have its cherished goal, and the nation would certainly make its position amidst the world comity.

The Prime Minister extended her heartfelt thanks to the organizers of the event, participants and all Bangalees at home and abroad who have expressed their solidarity with the programme.