One of the world’s oldest Quran manuscripts found in UK 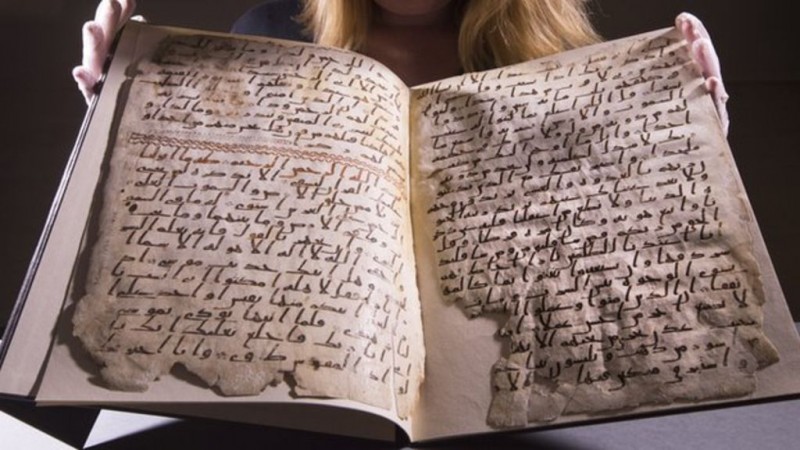 A Koran manuscript has been carbon dated to close to the time of the Prophet Mohammed, making it one of the oldest in the world, a British university. Photo: AFP

Following radiocarbon analysis by the University of Oxford, the manuscripts, written on parchments, have been dated to from between AD 568 and 645, with 95 percent accuracy. The results place the papers close to the time of the Prophet Muhammad, who is generally thought to have lived between AD 570 and 632.

Susan Worrall, Director of Special Collections at the University of Birmingham, said: “The radiocarbon dating has delivered an exciting result, which contributes significantly to our understanding of the earliest written copies of the Quran. “We are thrilled that such an important historical document is here in Birmingham, the most culturally diverse city in the UK.” The two parchments form part of the University’s Mingana Collection of Middle Eastern manuscripts. The manuscripts are written with ink in Hijazi – an early form of Arabic. They contain parts of Suras (chapters) 18 to 20.

For many years, the manuscript had been misbound with leaves of a similar Quran manuscript, which is datable to the late seventh century. Dr Muhammad Isa Waley, Lead Curator for Persian and Turkish Manuscripts at the British Library, said: “This is indeed an exciting discovery. We know now that these two folios, in a beautiful and surprisingly legible Hijazi hand, almost certainly date from the time of the first three Caliphs.”

A Koran manuscript has been carbon dated to close to the time of the Prophet Mohammed, making it one of the oldest in the world, a British university said Wednesday.

Tags: 370 years old.a British university said Wednesday.A Koran manuscript has been carbon dated to close to the time of the Prophet Mohammedmaking it one of the oldest in the worldOne of the world's oldest Quran manuscripts found in UKQur’an manuscript among world’s oldestRadiocarbon testsRadiocarbon tests reveal fragments of Islamic book held by the University of Birmingham are at least 1