Mazharul Anwar to be remembered until Bangla songs’ existence: Hasan 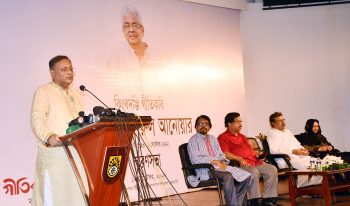 The minister said this while addressing a memorial meeting on eminent cultural personality Gazi Mazharul Anwar organized by Giti Kobi Sangha, Bangladesh and Shilpakala Academy at Chithrashala auditorium of the academy in the city.

Hasan said Anwar, who was also composer, filmmaker and producer, had composed more than 20,000 songs on different mediums including radio, television and cinema for 60 years.

Many timeless songs including ‘Joy Bangla, Banglar Joy’ of the legendary lyricist had encouraged the freedom fighters and freedom lovers during the great Liberation War, he added.

He said three of his songs have been included in the list of the “Twenty greatest Bengali songs”, made by BBC Bangla. He also produced many cinemas including Nantu Ghatak, said Hasan, also Awami League joint general secretary.

He said the people of the country will remember the persons who enriched the Bangla culture and songs as well.

The minister prayed for eternal peace of the departed soul and conveyed deep sympathy to the bereaved family.