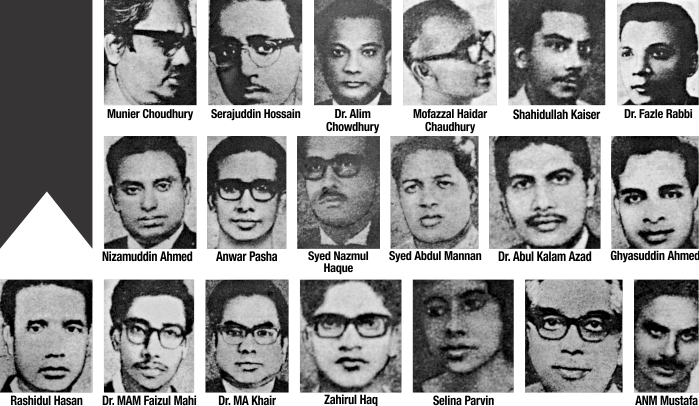 DHAKA, Dec 13, 2013 – The nation observes the Martyred Intellectuals Day tomorrow commemorating the brutal murders of the country’s golden sons and daughters on this day in 1971 at the fag end of the country’s ultimate victory achieved on December 16 after a bloody nine-month war with the Pakistani occupation forces.

After the hard-earned Independence, the nation’s mourning on this day every year spirits up the philosophy of the supreme sacrifices of these immortal intellectuals, who are very respectfully remembered by all with tears over the most sorrowful deaths of the greatest sons and daughters of the soil.

Today’s Bangladesh has come across countless odds and uphill with its democracy and development as the sacred blood of those intellectuals has correctly valued their supreme sacrifices by serving the nation in the best possible ways since 1971.

This year’s Martyred Intellectuals’ Day is especially being observed with the nation witnessing the hanging of the first war criminal Kader Mollah under a court verdict of death penalty for the inhuman crimes he committed during the War of Liberation.

At least 10 war criminals were so far awarded capital punishment for their crimes against humanity during the War of Liberation in Bangladesh. Of them, Golam Azam and Abdul Alim were awarded 90 year’s in prison and life-long in jail respectively.

Sensing their humiliating defeat in the hands of the almost unarmed Bangalis during the War of Liberation, the barbarian Pakistan soldiers and their local collaborators-Razakar, Al-Badr and Al-Shams-abducted leading Bengali intellectuals and professionals and killed them to cripple the nation intellectually.

Academics, writers, physicians, engineers, journalists and other eminent personalities were among the people dragged blindfolded out of their houses in Dhaka and massacred at Rayer Bazar and in other killing fields in the city only two days before the country’s liberation achieved with the surrender of the Pakistani butchers.

On the eve of Martyred Intellectuals Day, President Abdul Hamid, Prime Minister Sheikh Hasina and Leader of the Oppositions Begum Khaleda Zia issued messages paying their rich tributes to the martyred intellectuals and recalling their contribution in achieving the much- awaited Independence of the country.

Newspapers will publish special supplements while radio and television channels will air special programmes to commemorate the martyrs. The day’s programmes will begin with the hoisting of the national flag at half-mast and black flags atop public and private buildings in the morning.

First Prime Minister of Bangladesh Tajuddin Ahmed declared December 14 as the Martyred Intellectuals’ Day because the largest number of abduction and subsequent murder of the intellectuals took place on this day leaving behind the war-torn nation into a further state of utter shocking.

A spokesperson for the Mujibnagar government in a statement on December 20, 1971 said the Pakistani occupation forces and their local collaborators had killed 360 intellectuals before they surrendered on December 16, 1971. Shaheed Buddhijibi Koshgrantha, a biographical encyclopedia of martyred intellectuals published by the Bangla Academy and reprinted in 1994, put the number at 232.

‘Bangladesh’, a documentary publication of the government in 1972, said the Pakistani occupation forces and the local killing squads unleashed by them had killed 637 primary and 270 secondary school teachers and 59 college teachers during the War of Liberation. Some of the bodies were decomposed beyond recognition when the mass graves could be located.

Father of the Nation Bangabandhu Sheikh Mujibur Rahman returned home from the Pakistani jail on January 10, 1972 and announced that the war criminals would be tried. On March 17, Bangabandhu told a delegation of the families of the martyred intellectuals at Ganabhaban that an inquiry of the killings had been ordered.

In July 1972, Bangabandhu’s government formed a committee comprising Supreme Court lawyers Sirajul Haq and Aminul Huq to investigate into the genocide. The committee compiled evidences painstakingly and submitted a report on 1,500 cases to the home ministry in July 1972.

After the promulgation of the Bangladesh Collaborators (Special Tribunals) Order 1972, widely known as the collaborators order, on January 24, 1972, Bangabandhu’s government set up 73 special tribunals, including 11 in Dhaka, to hold trial of Razakar, Al-Badr and Al-Shams forces, defined as collaborators in the order.

The families of many martyred intellectuals filed cases under the order. As of March 28, 1972, a total of 42 cases were filed, according to an announcement of the police at the time. The number kept rising till November 1973.

What Does the Future Hold for Tablet Devices?