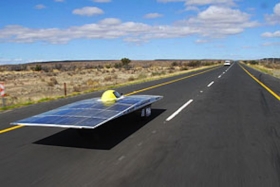 A team from Japan won a world solar car race through Australia’s outback on Thursday, after battling more than 3,000 km (1,800 miles) of remote highways, dodging kangaroos and other wildlife and avoiding a bushfire.

Race officials said the team from Tokai University, near Tokyo, finished the race from the northern city of Darwin to the southern city of Adelaide at about noon on Thursday.

The teams set off on Sunday. The Nuon Solar Car Team from the Netherlands came second, while a U.S. team from the University of Michigan finished third.

Nuon’s driver Javier Sint Jago said he had to avoid a bushfire, wallabies, cattle, sheep and lizards on his marathon drive, although the biggest challenge was to fight the strong winds which buffeted his 140 kg (300 lb) vehicle.

Thirty-seven cars from 21 countries started off in Darwin, heading south and using only the power generated by the sun in the 11th running of the annual race.

High-tech solar cars use public highways on the trek, with teams camping out by the road overnight as their cars run out of power after dark.

Along the way, they dodge other traffic, as well as kangaroos, camels and other wildlife wandering the outback deserts.

This year’s race was made more dangerous by bushfires in the remote Northern Territory, which forced some cars to stopracing on Tuesday and camp out at a police roadblock as the fires crossed the highway, 300 km north of the central town of Alice Springs.

Facebook at Work comes out of beta and launches as Workplace