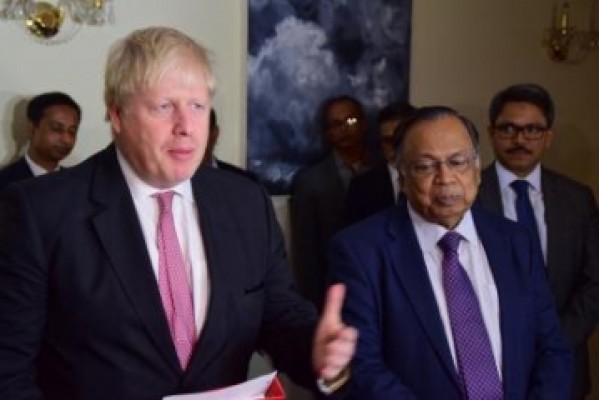 #thenewscompany – The direct Dhaka-London cargo flight is expected to resume shortly as Britain is going to lift the ban imposed on Bangladesh in this regard in March 2016.

“It’s all but done…Bangladesh government has made up huge effort to sort out the issue and we are pleased to note the progress,” said the visiting British Secretary of State of Foreign and Commonwealth Affairs Boris Johnson here yesterday evening.

Talking to media following bilateral talks with his Bangladesh counterpart AH Mahmood Ali at State Guest House Padma, he said, “We are on the verge of resumption of the direct Dhaka-London cargo flight”.

The British foreign secretary arrived here Thursday on a two-day official visit to talk about Rohingya issue and the matters relating to intensifying the bilateral ties between the two countries.

Referring to Rohingya issue, Johnson highly appreciated the government’s efforts in dealing with one of the biggest crisis that Bangladesh has been facing following huge exodus of Myanmar nationals in Bangladesh.

“I want to congratulate Bangladesh, the government and the people on the way they have handled the one of the biggest humanitarian crisis we have seen in the last few decades,” he said.

Johnson said the government of Bangladesh has shown immense compassion and mercy in dealing with the challenges centering the huge influx of Rohingya refugees in Bangladesh.

Responding a query, he said Britain along with all international community want a safe, secure and dignified return of the Rohingya refugees in Myanmar.

In this connection, he said he would visit Cox’s Bazar Rohingya camps tomorrow and later Burma to see first-hand the conditions of the Rohingya who have fled Burma to refugee camps in Bangladesh and discuss with the Burmese government the steps needed to enable them to return to their homes.

About the existing bilateral ties between Bangladesh and the UK, he said after the Brexit, Britain wants to intensify ties with Bangladesh in the field of trade and commerce along with other development sectors.

Earlier on his arrival statement, the Britain foreign secretary said the plight of the Rohingya and the suffering they have had to endure is one of the most shocking humanitarian disasters of the recent time.

“This is a man-made tragedy that could be resolved with the right political will, tolerance and cooperation from all those involved…I will be talking to State Counselor Aung San Suu Kyi and other regional leaders about how we can work together to resolve this appalling crisis,” he added.

The British foreign secretary will travel on to Bangkok for talks with Thai Prime Minister Prayut Chan-o-cha and also meet the chair of the Advisory Board on the Rakhine Advisory Commission, Surakiart Sathirathai.