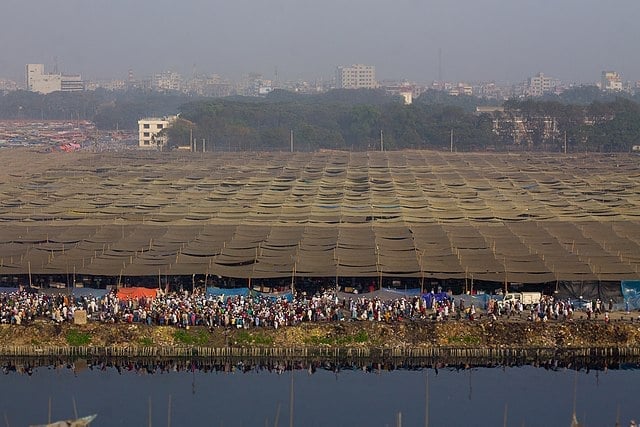 #thenewscompany : The first phase of the Bishwa Ijtema, the second largest congregation of the Muslims, will begin on the bank of the Turag River at Tongi, on the outskirts of the city, tomorrow. The Ijtema will begin with ‘Aam Bayan’ (general sermons) by noted scholars after Fazr prayers on the day that will end with Akheri Munajat (final prayers) on January 15.

The second phase of the Ijtema, however, will begin on January 20 at the same venue and it is scheduled to end with Akheri Munajat on January 22.

President M Abdul Hamid and Prime Minister Sheikh Hasina today issued separate messages on the occasion of the Bishwa Ijtema. In his message, President Abdul Hamid welcomed the pilgrims from different countries of the world, including Bangladesh, who are coming to join the Ijtema.

Mentioning that ‘Islam is a religion of peace and humanity’, the head of the state said the participation of Muslims from different countries of the world in the Bishwa Ijtema is a great initiative to follow the noble ideals and creed of Islam as well as its propagation and expansion. He hoped that Ijtema will pave the way to know, understand and practice the noble ideals of Islam.

Hamid believed that the Ijtema will play a significant role in strengthening the unity, solidarity and brotherhood of the Muslim-Ummah.

Prime Minister Sheikh Hasina, in her message, said every year since 1967, one of the largest congregation of the Muslims on the banks of the Turag River in Tongi on the outskirts of the capital Dhaka, has been making a significant contribution in propagating and spreading the message of Islam.

“Ijtema is a wonderful meeting place of mutual unity, harmony and friendship among Muslims from different parts of the world, which is an unparalleled example of Islamic society, discipline, brotherhood and magnanimity,” the premier said.

She hoped that the message of the cherished non-communal spirit, genuine simplicity and hospitality and tolerance of Bangladesh will reach the world through the foreign guests coming to Ijtema.

Following the footsteps of the Father of the Nation Bangabandhu Sheikh Mujibur Rahman, the Awami League (AL)-led government has taken many steps for the development of Islam in Bangladesh since assuming the state-power in 2009, she added.

Model mosques and Islamic cultural centers are being constructed in all districts and upazilas, she said, adding that through the Islamic Foundation (IF), the government is spreading the teaching of the Quran to millions of children under mosque-based and public education programs (Gono-Shikkha) to propagate the education of the Quran.

The greatest Bangalee of all time, Father of the Nation Bangabandhu Sheikh Mujibur Rahman took many effective steps in the development, propagation, expansion and service of Islam after the country’s great liberation war, Sheikh Hasina said.

Bangabandhu established Islamic Foundation and Madrasah Board, she said, adding that Bangabandhu donated land to the Kakrail Mosque for the Tabligh Jamaat and allocated land for the Bishwa Ijtema on the banks of the Turag River in Tongi, the premier continued.

“I wish the happiness, peace, welfare and prosperity for the countrymen including the Muslim Ummah to the Almighty Allah on the occasion of the Bishwa Ijtema,” said Prime Minister Sheikh Hasina.

“Adequate security arrangements have been taken for smooth holding of the Bishwa Ijtema. All the police, RAB and other law and enforcement agencies and the administration have been working together in a cordial atmosphere,” he told the journalists after visiting the Ijtema ground at Tongi in Gazipur on Wednesday.

“Car parking was arranged according to the division. Watch towers and control rooms were set up for the security of the Ijtema field. Police will perform duty in uniform and plain clothes,” Mamun said.

He added that sector based security measures were taken. Besides, the Rapid Action Battalion (RAB) helicopters will be engaged in security patrolling.

Sonali gets BB nod to sign deal with PayPal