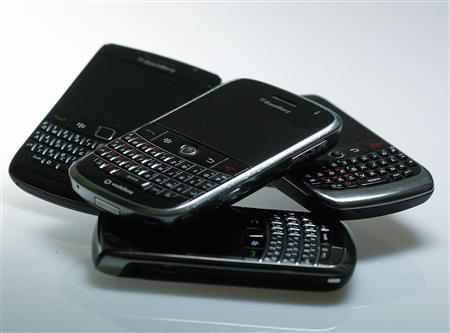 Research In Motion has fixed the root cause of a global disruption of BlackBerry services and is still working to clear a backlog of delayed messages, its co-CEOs said on Thursday, hoping to control the damage to RIM four days after the outage began.

The chief executives – Mike Lazaridis and Jim Balsillie – apologized for the system-wide failure that left millions of BlackBerry users without email, instant messaging and browsing and said the company would work to regain their customers trust.

“Our inability to quickly fix this has been frustrating,” Lazaridis said, sounding contrite. “We are taking immediate and aggressive steps to minimize risk of this happening again.”

Asked about whether RIM would pay compensation to carriers or enterprises that pay a monthly fee for its gold-standard messaging services, Balsillie suggested the company would consider that question in the coming days.

“Our focus has been 100 percent on getting the systems up and running. … That’s been our focus throughout the night and we have SLAs (service level agreements) with customers and that’s something we’re going to focus on now.”

A number of network providers around the world have already said they would compensate their customers over the lost service.

The outage – and RIM’s sluggish communications with its customers – have fanned rising dissatisfaction with Lazaridis and Balsillie, who made an unusual joint appearance on the conference call.

Even before the latest outage, critics have called for a shake-up at RIM, saying the top managers have let the company fall too far behind Apple and other rivals in a rapidly changing market.

The session was only the second call that RIM has held since the crisis began on Monday.

Earlier on Thursday the company posted a video clip of Lazaridis apologizing for the incident. He repeated that message in his opening remarks at Thursday’s conference call.

Public relations specialists have wondered why it took the company so long, saying its response to the crisis has been slow and poorly communicated.

“I think a statement of empathy that wouldn’t cost anybody anything could have been made within hours,” said Allan Bonner, a leading public relations crisis management consultant in Toronto.

The Waterloo, Ontario-based company said it had restored full service, even as it acknowledged that the backlog caused by the outage was still working its way through system.

It said it determined that the outage – the most extensive in the company’s history – was caused by a malfunctioning switch at a data center in Slough, England, and the subsequent failure of a backup to operate properly.

That triggered a massive reservoir of data that jammed up other data centers, spreading the disruption to most regions.

Lazaridis said it would take some time to pinpoint why the switch and back-up both failed, setting off the crisis.