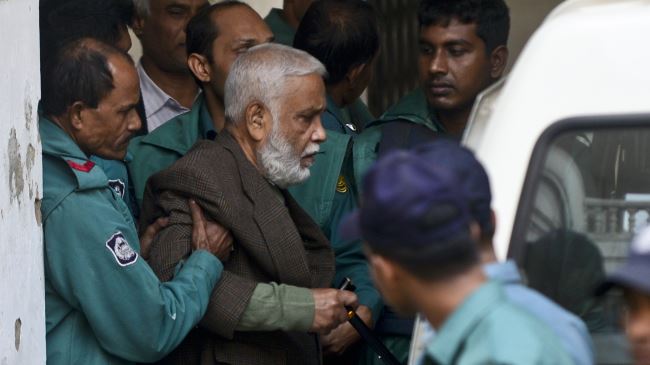 e-News® | The NEWS Company…Dhaka, December 24, 2014 : A former junior minister in a Bangladeshi military government was sentenced to death on Tuesday after a war crimes tribunal found him guilty of atrocities during the country’s war of independence from Pakistan more than four decades ago.

Syed Mohammad Qaisar, 73, was found guilty of 14 out of 16 charges including genocide, rape, extortion, arson and torture committed during the 1971 war, prosecutors said. Bangladesh became part of Pakistan at the end of British rule in 1947 but broke away after a war between Bangladeshi nationalists, backed by India, and Pakistani forces.

Pakistani-backed fighters were accused of numerous abuses during the war. About 3 million people were killed, according to official figures, and thousands of women were raped.”Wounds of rape are greater than wounds of bullets,” state prosecutor Tureen Afroz told reporters outside the closely guarded court, after the verdict.

Qaisar denied the charges. He did not make any comment but his lawyer, Syed Mohammad Shahjahan, told reporters his client would appeal: “We didn’t get proper judgment.” The tribunal began hearing cases in 2010 with the support of Prime Minister Sheikh Hasina. Her opponents say she is using the tribunal against the two biggest opposition parties – her arch rival Begum Khaleda Zia’s Bangladesh Nationalist Party and its Islamist ally Jamaat-e-Islami.

International human rights groups have said the tribunal falls short of international standards. The government denies that. The tribunal has convicted 15 people and sentenced 13 of them to death. One person has been executed.

In September, the Supreme Court commuted to life imprisonment a death sentence for a top Islamist leader, Delawar Hossain Sayedee, convicted on similar charges. More than 200 people have been killed in violent protests against the tribunal and its decisions, most of them Islamist party activists and members of the security forces. Some factions in Bangladesh, including the Jamaat, opposed the break with Pakistan, but the party denies accusations that its leaders committed atrocities.

Tags: ” Judge Obaidul Hasan said.Bangladesh hands down death sentence to ex-ministerBangladeshi ex-minister sentenced to death for war crimesSyed Mohammad QaisarThe 73-year-old will be “hanged by the neck until his deathwar of independence