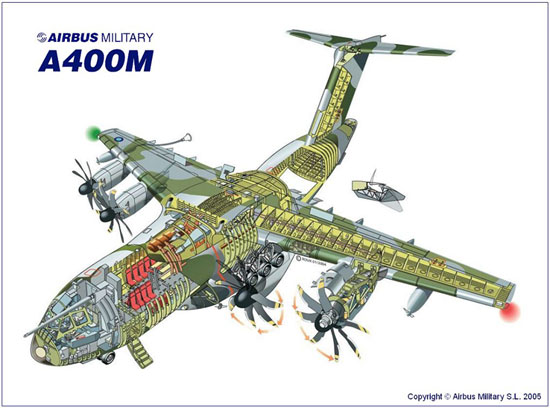 e-News® | The NEWS Company…LONDON, Sept.15, 2015 : The U.K. is rapidly building up confidence and capability on its new A400M airlifter, but its introduction is creating some unexpected headaches, test and evaluation officials say.

Long delays in the development of the aircraft’s Standard Operating Clearances (SOCs), which allow it to perform tactical missions, have resulted in aircraft being delivered with differing equipment fits and capabilities, explained Sqn. Ldr. Glen Willcox and Flt. Lt. David Arnold of the U.K.’s Heavy Aircraft Test Squadron (HATS), which is performing the test and evaluation of the aircraft as it enters service. The U.K. defense ministry has drawn up an eight-year timetable of Capability Milestones (CMs) that the A400M will need to achieve if it is to replace the Royal Air Force’s fleet of C-130J Hercules in 2022.

“The U.K. had planned to take its deliveries in batches, based on the Standard Operating Clearances,” said Willcox, the A400M test and evaluation flight commander, speaking at the Royal Aeronautical Society Sept. 10. However, delays in developing SOC has meant that each aircraft has been delivered with minor differences, resulting in the problem of having fleets within fleets, even at this early stage in the program. Britain has been less concerned about delays to the SOCs than other A400M customer nations such as France and Germany, both of whom have been highly vocal about the issues because they remain dependent on the aging C-160 Transall. Germany’s concerns prompted Airbus to undertake an overhaul in the management structure of the program.

Britain, on the other hand, has been able to fall back on its C-130J and C-17 fleets. However, every one of the A400Ms delivered to the U.K. so far has been different from the others. These differences are generally minor, ranging from the ability to open doors in flight to the functionality of the loadmaster’s workstation on the cargo deck. Aircraft have also lacked the military radar, only featuring weather radar modes up until the arrival of the latest aircraft, MSN24, which was delivered on the same day as the lecture in London.

“There are many changes to manage,” Willcox said. “This has a knock-on effect to the training of the front-line crews.”

Acceptance and delivery of each aircraft is carried out by civil servants and engineers and with the first few aircraft. For these early aircraft the process was taking up to five weeks, while the planned single, five-hour long acceptance flight would often turn into two or three sorties because of engineering hiccups. MSN25, which will be delivered shortly, will be the first to only need one flight, Willcox told delegates, and a shorter acceptance period of around three weeks. These issues have placed an additional burden on the test and evaluation crews, to the point that the U.K. has had to expand the number of personnel working on the program from two crews to four by the end of the year, all dedicated to A400M.

Personnel from HATS have been integrated into the entire A400M operation, not only embedded into the Airbus development program, but also working closely with the French at Orleans — the main French A400M base — as well as the front-line squadron at RAF Brize Norton, the main operating location for British A400Ms. The U.K. has established nine capability milestones (CMs), labeled 0-8, of which the first three, 0-2, have already been declared, allowing the crews to fly global missions. CM3, allowing operations into non-benign theaters, is due to be declared in mid-2016, while CM8 will allow full Special Forces capabilities (but this is not expected until 2022).

Testing on the various U.K.-specific aspects of the A400M — known as Delta testing — will begin this December, led by Qinetiq. Early elements of these tests will include low-level tactical flying, but also air dropping of platforms, the use of night vision goggles and U.K. flying helmets, as well as parachutes and Special Forces equipment. The work is scheduled to last several years. Despite these apparent hiccups, the RAF is happy with its A400M fleet and the air arm is now the A400M fleet leader in terms of flying hours, with 900 hr. achieved on the four-strong fleet over 300 sorties.

Willcox said reliability levels are also high for an aircraft so early in its career. The U.K. has already completed night vision goggle trials, noise characterization tests, and the first tie-down schemes for cargo. The RAF actually performed their first operational mission in March flying cargo to Akrotiri air base, Cyprus. British A400Ms were the first in-service aircraft to cross the International Date Line and have also completed hot and cold soaks. Pilots report jet-like performance from the turboprop, similar to that of a C-17, and that the type was largely meeting the performance data published by Airbus.

The RAF has 22 A400Ms on order and four in service, with two more to be delivered shortly and four to be delivered by the end of the year. Several aircraft are in Spain being fitted with defensive aid systems.

Hawking turns 70 with "a brief history of mine"

How to see through people's clothes with a video camera…