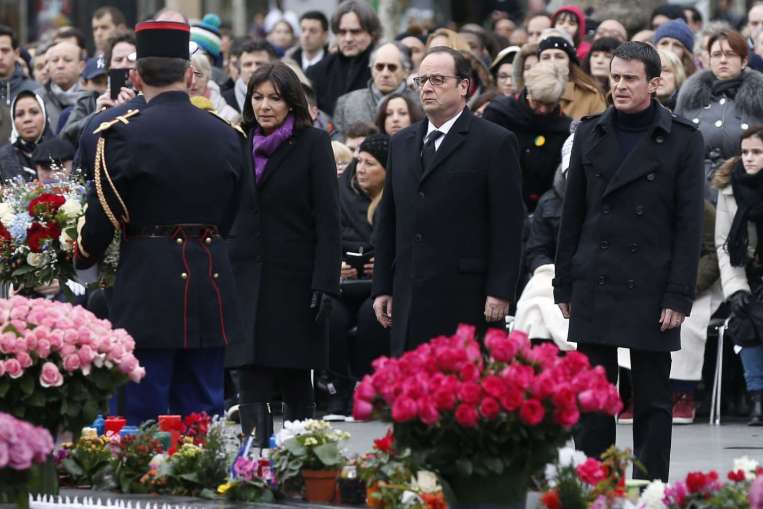 e-News® | The NEWS Company…PARIS, Jan 10, 2016 : Several thousand people gathered in Paris Sunday in a low-key ceremony to mark a year since a million and half citizens thronged the French capital in a show of unity following jihadist attacks on satirical newspaper Charlie Hebdo and a Jewish supermarket.

People attending the event in the Place de la Republique were searched by armed police before standing around a simple stage and a monument covered in the red, white and blue French flag. President Francois Hollande unveiled a plaque next to an oak tree planted in the square in memory of the victims of the jihadist outrages that rocked France in 2015, beginning with the shootings at Charlie Hebdo. Veteran rocker Johnny Hallyday performed a short song and the army’s choir gave a rousing rendition of the Marseillaise.

The understated event was a far cry from January 11, 2015, when four million citizens rallied across France, in the biggest mass demonstrations since the end of World War II. The outpouring of support for freedom of expression was crowned by a huge march in Paris that included German Chancellor Angela Merkel, Israeli Prime Minister Benjamin Netanyahu and Palestinian leader Mahmud Abbas. Twelve people were killed in the January 7 2015 assault on Charlie Hebdo, which had been in the jihadists’ sights since publishing cartoons of the Prophet Mohammed in 2006.

The next day, another extremist, Amedy Coulibaly, shot dead a policewoman before killing four people in a siege at a Jewish supermarket. France’s year of jihadist bloodshed culminated in the coordinated shootings and suicide bombings in Paris on November 13 that killed 130 people and were claimed by the Islamic State (IS) group. Sunday’s event was dedicated to all the victims from the attacks last year, which left the country in shock and under stringent security measures, including a state of emergency. One of those who attended the commemoration, Jacques Clayeux, a 54-year-old museum technician, had known one of the murdered cartoonists, Tignous.

“Everyone grew up with those guys,” he said. “But I have mixed feelings today. It is terrible to attack journalists, but it’s scary to live under a state of emergency.”

The one-year anniversary on Thursday of the Charlie Hebdo shootings was overshadowed when a man was shot dead by police as he approached a police station in northern Paris wielding a meat cleaver and wearing what turned out to be a fake explosives vest. The man, believed to be a Tunisian called Tarek Belgacem, shouted “Allahu Akbar” (God is great) before trying to attack an officer at the entrance of the police station in the ethnically-mixed Goutte d’Or district. He was carrying a handwritten letter claiming he was acting in the name of IS.

German police confirmed late Saturday that he had been living in an asylum seekers’ shelter in Germany. The thwarted attack underlined the authorities’ concerns that another terror assault remains highly likely in France. Hollande responded to the November massacre by vowing to crush IS and French jets have been bombing the extremist group in Syria and Iraq.

Mosques in France opened their doors to the public this weekend in a bid by the Muslim community to build bridges following the attacks. Interior Minister Bernard Cazeneuve was among those who sipped mint tea as he visited a mosque near Paris on Saturday. France needs, more than ever, “the engagement of all Muslims in France,” Cazeneuve said, while warning that “the self-proclaimed preachers of hate” in mosques would be dealt with severely.

Tags: President Francois Hollande unveiled a plaque next to an oak tree planted in the square in memory of the victims of the jihadist outrages that rocked France in 2015Thousands gather in Paris to remember million-strong post-attacks rally

Laptops Powered by Typing Could Be on the Way