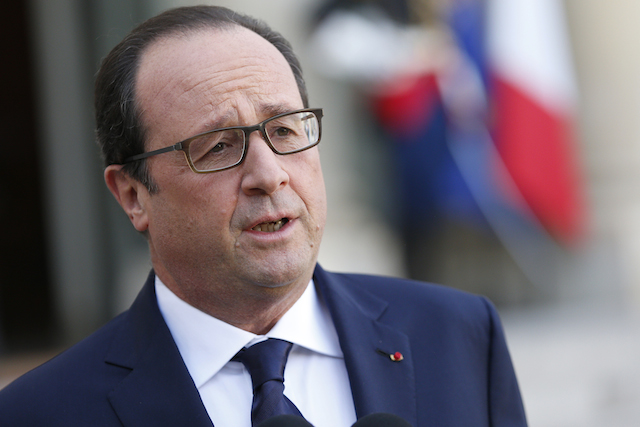 e-News® | The NEWS Company…PARIS, Dec 30, 2015 : President Francois Hollande’s call for convicted terrorists to lose their French citizenship if they have a second nationality has triggered uproar among those who see him adopting right-wing ideas that recall dark moments in France’s history.

Ever since the French Revolution in the late 1700s, “le droit du sol” (“the right of the soil”) has been a fundamental principle, giving everyone born in the country the right to citizenship. But in the aftermath of November’s jihadist attacks in Paris, Hollande announced to an extraordinary session of both houses of parliament that he would seek changes to the constitution so that dual-nationals could be stripped of their French passport.

Patrick Weil, a political scientist who met Hollande and advised him against the decision, said France would become “the first democracy in the world” to enshrine in its constitution the principle of unequal treatment of dual nationals.

“It introduces the idea of a different penalty for the same act, just because of the random chance of their birth,” said Weil, who teaches at Yale University in the United States. “That people — who sometimes don’t even know they have a second nationality — can be banned is like the return of banishment as a penalty.”

For many in Hollande’s Socialist party, and others on the left of French politics, the move is little short of ideological treason.

“In wanting to steal the thunder of the far right, we risk implementing their programme,” said Cecile Duflot, a former minister in Hollande’s government.

Economist Thomas Piketty, author of the blockbuster book on inequality “Capital in the 21st Century”, wrote on his blog: “To its economic incompetence, the government has now added infamy.”

As well as breaking a legal principle, the measure also touches a raw nerve from France’s history, say critics.

The Vichy regime, which collaborated with the Nazis in the 1940s, stripped thousands of Jews and foreigners of French citizenship during World War II.

Dissenters say Hollande has borrowed from the playbook of the right wing, not least since the treatment of immigrants was one of the few areas where there was clear daylight between the two mainstream parties.

When right-wing leader Nicolas Sarkozy raised the idea of removing the “droit du sol” from some types of violent criminals in 2011, he was blasted by the Socialists.

Worse still in the eyes of the left, it was an idea first mooted by the far-right, anti-immigrant National Front (FN).

FN leader Marine le Pen happily took credit when the new reforms were outlined last week, saying it was a direct result of her party’s record tally in recent polls.

“Removal of nationality: the first effect of the 6.8 million votes for the National Front in regional elections,” Le Pen wrote on Twitter.

But the attacks of November 13, in which 130 people were killed by Islamic State militants, have changed the calculus for Hollande. He has the support of a jittery nation, with nearly nine of 10 people backing the removal of citizenship in a poll for France’s BFM TV published Tuesday.

The reforms also aim to inscribe the right to declare a state of emergency into the constitution, including powers to raid homes and place people under house arrest without judicial oversight. Parliament will start debating them in early February, but any left-wing doubters are likely to be overpowered by strong support from the right. The episode has exposed divisions within the government and prompted many to doubt its competence, as Hollande appeared to change his mind repeatedly in the run-up to the decision. Just one day before the reforms were presented last week, Justice Minister Christiane Taubira confidently told reporters that the citizenship measure would be dropped because it was discriminatory.

Arthur Goldhammer, a prominent US commentator on France, described the episode as yet another “unforced error” by Hollande’s team. “Once again, Hollande looks both inept and unprincipled, incompetent and uncommitted to one of the fundamental values of the left,” he wrote on his blog, French Politics. Experts say the issue is all the more controversial for being so unnecessary.

Even Prime Minister Manuel Valls admits the measure is primarily “symbolic”, and few believe it can have any serious practical benefit given that many jihadists are happy to give up their lives, let alone their passports, to commit attacks. “The constitution is a text that is written to unify the people and this does the opposite,” said Weil.

“People know that reinforcing the cohesion of the nation is, in the long term, the only way to defeat terrorism, and this proposal creates an immediate division in the country.”