The Largest In The World Helicopter Completes Preliminary Flight Tests 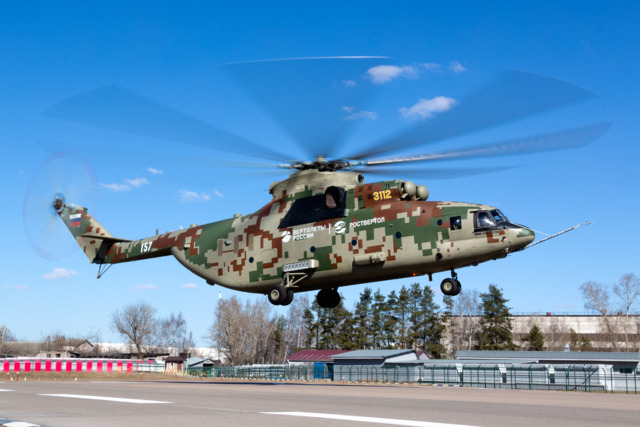 #thenewscompany : Russian Helicopters (part of Rostec State Corporation) successfully completed preliminary flight tests of the Mi-26T2V helicopter. The machine is being prepared for a handover to the Russian Ministry of Defense to do joint official tests.

The upgraded heavy Mi-26T2V helicopter designed in the interests of the Ministry of Defense made its first flight in August 2018. The machine participated in the International Military and Technical Forum ARMY 2018. Then it was transferred to Mil Moscow Helicopter Plant to do preliminary flight tests.

The customer requested that Mi-26T2V should ensure completion of tasks even in regions with complex physical and geographical and adverse climatic conditions, at any time of the day, at equipped and unequipped routes, or even without routes, and on featureless terrain, in conditions of fire and information counteraction of the enemy.

The new helicopter differs from the basic Mi-26 model due to a modern integrated NPK90-2V avionics suite, which significantly simplifies piloting of the helicopter. The latest avionics system allows following the route in automatic mode, coming to a preset point, performing approach and final approach maneuvers, and returning to the main or alternate aerodrome. The helicopter is also equipped with a digital flight center, and the crew cockpit has multi-function color LCD indicators that significantly reduce the workload of the flight crew. Moreover, Mi-26T2V got a new airborne defense complex Vitebsk that not only detects a threat to the helicopter, but also repels attacks.
Mi-26T2 lighting equipment is now adapted to the use with night vision goggles, and the cockpit is equipped with new energy-absorbing seats for the crew. There are also improvements to a navigation system and satellite communications of the helicopter.

JSC “Russian Helicopters”, a part of Rostec State Corporation, is a leading player in the global helicopter industry, the sole Russian designer and manufacturer of helicopters. The Holding Company was established in 2007 and is headquartered in Moscow. We operate five helicopter assembly plants, two design bureaus, component production and maintenance enterprises, aircraft repair plants and one helicopter service company providing after-sales support in Russia and abroad. The customers of the Holding Company are the Ministry of Defense, the Ministry of Home Affairs, EMERCOM of Russia, and other state customers, Gazpromavia, UTair Aviation company, large Russian and foreign companies.

Rostec State Corporation is a Russian corporation that was established in 2007 to facilitate the development, production and export of high-tech industrial products designed for civilian and military applications. The Corporation comprises over 700 organizations that are currently part of eleven holding companies operating in the military-industrial complex and four holding companies working in civilian industry, as well as over 80 directly managed organizations. Rostec’s portfolio includes well-known brands such as AVTOVAZ, KAMAZ, Concern Kalashnikov, Russian Helicopters, UralVagonZavod, etc. Rostec companies are located in 60 constituent entities of the Russian Federation and supply products to the markets of more than 100 countries. In 2017 the consolidated revenue of Rostec reached 1 trillion 589 billion rubles, while the consolidated net income and EBITDA amounted to 121 and 305 billion rubles respectively. In 2017, the average salary in the Corporation was 46 thousand rubles. According to Rostec’s strategy, the main objective of the Corporation is to ensure that Russia has a technological advantage in highly competitive global markets. Rostec’s key objectives include the introduction of a new techno-economic paradigm and digitalization of Russian economy.

Teletalk will launch 3G in March