Staff at the News Of The World say their last ever copy will be a bumper edition containing 120 pages and a 48-page pullout. 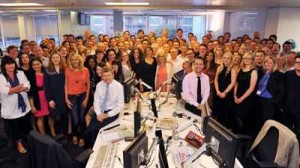 The Sunday tabloid, expected to be published later this evening, will also double its print run to five million as the 168-year-old newspaper comes to an end.
Rupert Murdoch, chairman of News Corporation – the parent company of News International (NI), which publishes the NOTW – said the decision to close the News Of The World was “a collective decision”.
The 80-year-old made the comments today at a media conference in Idaho before his scheduled visit in London tomorrow.

Sky News sources said staff at NOTW were putting together the final edition with “dignity” amid a feeling of “anger and injustice”.
On Twitter, the paper’s deputy political editor Jamie Lyons wrote: “At my NOTW desk for the last time. Let’s go out with a bang.”
Earlier, NI’s chief executive and former editor at NOTW Rebekah Brooks wrote to MPs repeating her innocence in the phone hacking scandal.
In the letter, she claims she had no knowledge of the practice taking place while she was in charge. 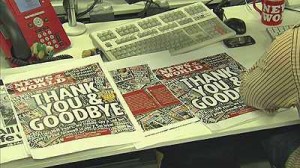 Staff prepare the final ever News Of The World edition

Leaving his home this morning, current NOTW editor Colin Myler said: “[It’s] very sad, but they’re a wonderful team of journalists, so they’re the people I’m thinking about today.”
Later, in a message to staff he said he knew they would “produce a paper to be proud of”.
“I could not have been more proud or privileged to have you as my colleagues,” he said.
“You have made enormous sacrifices for this company and I want you to know that your brilliant, creative talents have been the real foundation for making the News Of The World the greatest newspaper in the world.”

He added: “Let’s try to make the most of this incredibly sad but historic day.
“It’s not where we want to be and it’s not where we deserve to be.”
Helen Moss, news and features sub editor at NOTW, emerged from the paper’s Wapping site to tell reporters it was “an extremely sad day”.
She said: “We’re all extremely emotional. But every single one of us working up there today is very proud of working for the News Of The World.
“We’re very proud of our colleagues, we’re very proud of our editor, and we go out with heads held up high.” 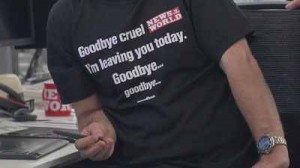 Earlier, a 63-year-old man – understood be to a private investigator who worked for the tabloid – has been released on bail.
Former NOTW editor Andy Coulson and former royal reporter Clive Goodman were released on Friday night on police bail after being arrested earlier.
Speaking outside his home this morning, Mr Coulson said: “I think this is a very sad day for the News Of The World.
“More importantly to the staff who, in my mind, are brilliant, professional people and I really feel for them.”
Shares in BSkyB – owner of Sky News – tumbled amid fears over the future of News Corporation’s bid for the satellite broadcaster.
By the end of trading on Friday the price of shares had fallen 7.6% to 750p.

Meanwhile, Prime Minister David Cameron has come under pressure to name a judge quickly to head the inquiry into phone hacking at the NOTW.
It comes after News International denied reports that police are investigating suspected deletion of emails by an executive.
The Guardian reports Scotland Yard is probing claims that a member of staff deleted “millions of emails” from an internal archive.
Police refused to comment on the allegations but a NI spokeswoman said the assertion was “rubbish”.
“We adopted a documented email retention policy in line with our US parent’s records management policy,” she said.
“We are co-operating actively with police and have not destroyed evidence.”

The axe fell on the NOTW after a series of increasingly damaging phone hacking allegations left its reputation in tatters.
The bombshell announcement came as advertisers deserted the paper in droves and police revealed 4,000 people may have had their phones hacked.
The BBC claimed the parents of murdered Soham schoolgirls Holly Wells and Jessica Chapman could have been targets while The Guardian reported murder victim Milly Dowler’s phone was also accessed illegally.
The NOTW also stands accused of paying thousands of pounds illegally to corrupt police officers.

Tags: 'Thank You And Goodbye'- News Of The WorldNews of The WORLDNOTW

Yahoo CEO to step down amid controversy