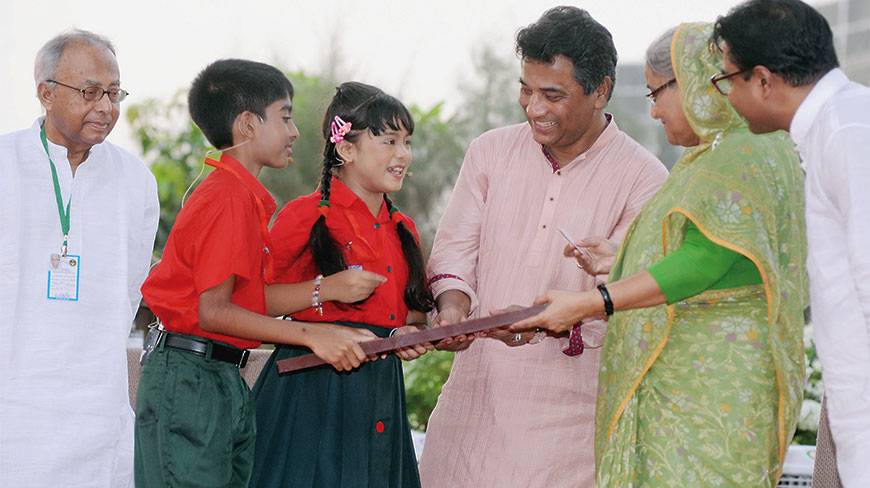 e-News® | The NEWS Company…Dhaka, October 06, 2015 : Dedicating all her awards to the country’s people, Prime Minister Sheikh Hasina yesterday vowed to establish a poverty- and hunger-free liveable “Shonar Bangla” for the future generation. She said this while addressing a civic reception arranged by Dhaka North City Corporation (DNCC) and Dhaka South City Corporation (DSCC) at the south plaza of parliament as she won the “Champions of the Earth Award” and “ICT Sustainable Development Award.” The United Nations Environment Programme (UNEP) and the International Telecommunication Union (ITU) conferred the awards on the prime minister during the 70th Session of the UN General Assembly.
Seeking support from people, Sheikh Hasina said the programmes her present government has taken for the country’s development have to be implemented. Hasina also said she has dedicated her life to people’s wellbeing and the country’s overall development, reports UNB. The premier said all her achievements are for the people of the country. “Because on my return home in 1981, I got the affection and love of father, mother and brothers from these people… I am ready to make any sacrifice for these people.”
Hasina repeatedly said she would never allow the people of this country to move with their heads down. “Our aim is to have a dignified place for the people of this country on the international stage,” she added. Talking about the vision of a Digital Bangladesh, she said her government wants to ensure an improved lifestyle for the people of this country through the use of modern technologies. About ensuring basic rights like food, clothes and accommodation, the prime minister said Bangladesh would have to ensure these rights using only its 54,000 square miles.
“It is natural that for development there is some impact on the environment. We will have to do that development keeping the environment unharmed.” Speaking on climate change, its effect on Bangladesh and the challenges, Hasina said her government was not at all dependent on anyone. Mentioning that her government has been protecting the environment and biodiversity using the country’s limited resources, she said: “We started our programmes with our own resources, and this is now an example in the world.” Hasina said Bangladesh needs to be kept green protecting its wetlands and water-bodies and the biodiversity. “On the other hand, we must expedite the country’s development. And for that we will have to lay emphasis on research.”
In this connection, she also briefly mentioned various achievements in researches conducted by the country’s scientists.
Earlier, the Prime Minister also witnessed a colourful cultural function. Mayors of the two city corporations presented a tree to the prime minister while two tiny tots read out a citation and gave it to her.
Chaired by DNCC Mayor Annisul Huq, the function was also addressed by Professor Emeritus of Dhaka University Rafiqul Islam, LGRD Minister Khandker Mosharraf Hossain, and DSCC Mayor Mohammad Sayeed Khokon.