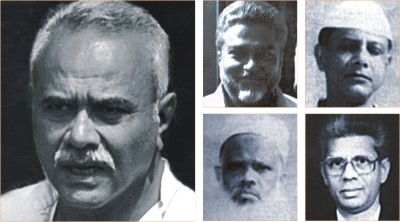 e-News® | The NEWS Company…DHAKA, August 15, 2015 :  The nation was freed from an age-old stigma following the execution of the verdict of five among the death sentence awarded accused in the murder case of Father of the Nation Bangabandhu Sheikh Mujibur Rahman on January 28, 2010 at Dhaka Central Jail. On the night, the process of execution began at 12.01 am. At first, former Lieutenant Colonel of Army Mohiuddin Ahmed (Artillery) and former Major Bazlul Huda were executed. Few minutes later, sacked Lieutenant Colonel Faruk Rahman was executed. At last, former Lieutenant Colonel Shahriar Rashid Khan and AKM Mohiuddin Ahmed (Lancer) had been executed.

The entire process to execute the verdict was completed within 40 minutes. After the execution, prison officials told the waiting reporters about the expectations of five killers. Hundreds of people from all walks of life took to the streets surrounding Dhaka Central Jail. Five ambulances were readied to carry the bodies to the relatives of the executed Army officials. Besides, a police van carrying five coffins made from wood and another private vehicle carrying two beds were kept in front of the prison gate.

The beds were used to bathe the bodies after execution. Members of Rapid Action Battalion (RAB), Armed Police Battalion and plain-clothes policemen were patrolling the streets surrounding the jail and they stopped vehicular movement on the streets for several hours. Dhaka District Magistrate and Deputy Commissioner Jilar Rahman, Civil Surgeon Dr Mushfiqur Rahman and additional district magistrate Abhijit Sarker along with director general of Prisons Brigadier General Ashraful Islam entered the prison to see the execution. The then home secretary Abdus Sobhan Sikder and the then DMP commissioner AKM Shahidul Haque were also present on the occasion.

Earlier, some 61 relatives of the accused met them for the last time. Of them, two detained sons of Mohiuddin Amhed were taken from Kashimpur Prison to Dhaka Central Jail to meet their father. In 1998, a court handed down capital punishment against 15 former Army officers for killing Bangabandhu and most of his family members. Later, the High Court, in a verdict, released three of them. Among 12 accused of the case, five were executed, six are fugitives and one died in Zimbabwe.