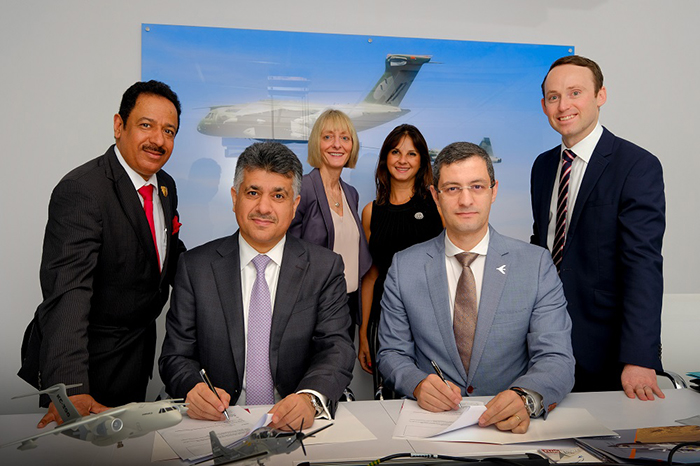 #thenewscompany : Organisers for the Bahrain International Airshow have announced that regional jet manufacturer Embraer has confirmed its participation in the forthcoming edition of the show, which takes place from 14-16 November 2018. Joining the show for the first time as a chalet holder, Embraer will have the perfect platform to explore the potential in the Middle Eastern market.

Bahrain Minister of Transportation and Telecommunications, HE Engineer Kamal Bin Ahmed Mohammed, who was attending the Singapore Airshow as part of the Ministerial and Chief Executive Panel of the Singapore Airshow Aviation Leadership Summit (SAALS) 2018, signed the deal with Embraer’s APAC President, Ricardo Pesce and the CEO of Embraer Defense and Security, Jackson Schneider.

Speaking about the participation, the Minister said, “I am very pleased to sign this agreement with Embraer, and I believe their decision to join us this year reflects the show’s growing strength as a business networking event for the Middle East aerospace sector. Our first class facilities right on the runway are the perfect environment to host high-level business meetings and display aircraft both in the air and on the ground.”

Commenting about the show, the Minister said, “The show’s international participation represents the Kingdom’s core trading partners and reflects Bahrain’s growing position as an aerospace and logistics hub for the commercial aviation sector. Our strategic location in the Middle East also makes Bahrain and the show a key networking opportunity for the defence sector.”

Networking and engagement are key USPs for BIAS18 with the Manama Air Power Symposium taking place the day before and a strong military and commercial delegations programme. In conjunction with Ministry of Transportation and Telecommunications, Farnborough International will also be building on the conference and seminar programme that was established in 2016 and the hosted buyer programme is also set to return where we match suppliers with buyers in a series of short introductory meetings to visitors and exhibitors can maximise their time at the show.

Phones that let you feel the world