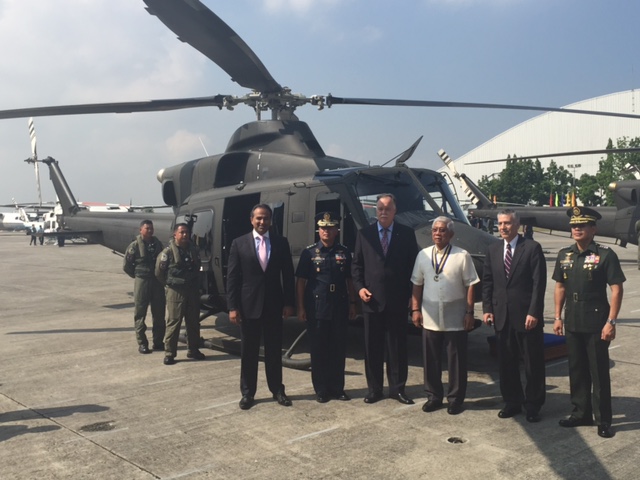 “We are proud to deliver the final of eight Bell 412EP aircraft today – three months ahead of schedule and, as promised, in time for the Asia Pacific Economic Cooperation (APEC) Summit in November,” said Sameer A. Rehman, managing director of Bell Helicopter, Asia Pacific. “Bell Helicopter has played an important role in the Philippines’ national defense for six decades, and it is a profound privilege to continue this relationship and serve the DND for decades to come.”

The eight Bell 412EP helicopters, fully configured and equipped with advanced features, were purchased with the government-to-government contracting support of the Canadian Commercial Corporation (CCC), and fully meet the DND’s modernization requirements. Bell Helicopter began staged deliveries in June of the eight aircraft to be used for combat utility and VIP transport operations, as well as relief efforts.

“We are pleased to receive the last of these remarkable aircraft and continue our long-standing relationship with the Bell Helicopter team,” said Undersecretary Fernando I. Manalo from the Philippine Department of National Defense. “We look forward to employing the versatility and improved performance of the Bell 412EP.”

“It is a great occasion to be here today and observe the delivery of the final Bell 412EP aircraft. These world-class aircraft represent a leap in capabilities for the DND,” stated James Mott, contracts manager for the CCC. “Today we also honor the strong defense collaboration between Canada and the Philippines, and the longstanding cooperation between the CCC and Bell Helicopter to provide cost-effective government-to-government contracting solutions for advanced aerospace products.”

The Bell H-13 Sioux, a variant of the iconic Bell 47, was the first helicopter to enter into service with the PAF in 1955. The PAF has operated derivations of the Bell UH-1H since the late 1960s, and since 1994 when they received their first two Bell 412s.

The Bell 412 and its variants offer the most rugged medium twin-engine helicopter available, with the best readiness rate of any helicopter in its class. The Bell 412EP easily fulfills many mission critical helicopter operations worldwide, offering reliable performance in some of the most extreme climates. Its dual digital automatic flight control system with available IFR option and Category A/JAR OPS 3 capability provides greater control and improved situational awareness. With a cruise speed of 122 knots (226 kph), range of 357 nautical miles (662 km) and an expansive cabin easily accommodating 13 passengers and two crew members, the Bell 412EP is capable of fitting multiple mission criteria.

About Textron Inc.
Textron Inc. is a multi-industry company that leverages its global network of aircraft, defense, industrial and finance businesses to provide customers with innovative solutions and services. Textron is known around the world for its powerful brands such as Bell Helicopter, Cessna, Beechcraft, Hawker, Jacobsen, Kautex, Lycoming, E-Z-GO, Greenlee, and Textron Systems. For more information, visit www.textron.com.

Certain statements in this press release may project revenues or describe strategies, goals, outlook or other non-historical matters; these forward-looking statements speak only as of the date on which they are made, and we undertake no obligation to update them. These statements are subject to known and unknown risks, uncertainties, and other factors that may cause our actual results to differ materially from those expressed or implied by such forward-looking statements.