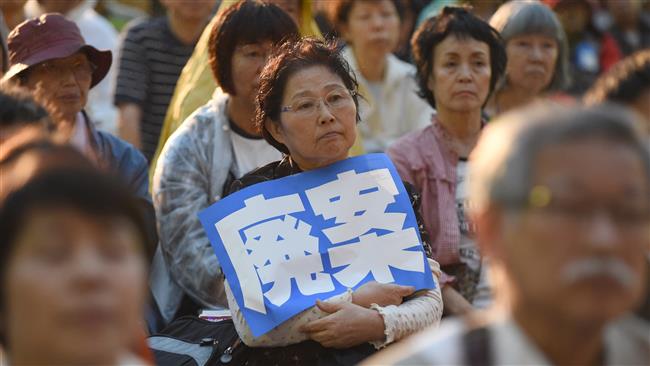 e-News® | The NEWS Company…TOKYO, Aug 28, 2015 :  A group of Tokyo university students have staged a rare hunger strike in front of Japan’s parliament as they protest against security bills that critics fear would drag the country into foreign wars. The move highlights growing opposition to legislation backed by Prime Minister Shinzo Abe, just days after Japan’s national bar association joined the effort to prevent the constitutionally pacifist nation from enacting changes that could see Japanese troops engage in combat for the first time since the end of World War II.

Four male students began their hunger strike Thursday afternoon in front of the Diet building, saying a “direct and tough approach” was required to block the bills, which are being hotly debated in parliament. The group, who spent their first night on the street in the Nagatacho political district, said they would hold off food until they reached their “physical limit”.

“(A hunger strike) is an act of risking one’s life… but I thought I should express my opposition to these bills more directly,” said Shotaro Kimoto, 19, one of the group members and a student at the prestigious Waseda University. “If parliamentary debate stops, then we have achieved our goal.” Under the proposed new rules, Japan’s Self-Defence Forces would have the option of going into battle to protect allies even if there was no direct threat to Japan or its people.

Abe and his supporters say the bills are necessary for Japan to deal with the security environment, and want them to clear parliament during the current session which ends late next month. But opponents say they will drag Japan into distant American wars, and the legislation is deeply unpopular among the general public. A constitution imposed by a post-war US occupation force barred Japan’s military from combat except in self-defence.

The bills cleared the powerful lower house last month. “We were appalled and furious that the bills were rammed through the lower house despite strong opposition,” said Motoya Tsuchida, 19-year-old law student at Keio University, a supporter of the hunger strikers. “We thought we needed to voice our opposition with a tougher approach.” While relatively small street demonstrations are carried out frequently in Tokyo, hunger strikes are rare.

Two years ago, an anti-nuclear group went on a rotating hunger strike for a week over government efforts to end a demonstration calling for the end of atomic power after the Fukushima accident.