Economist Barkat lays out scheme to raise finances from 14 sources 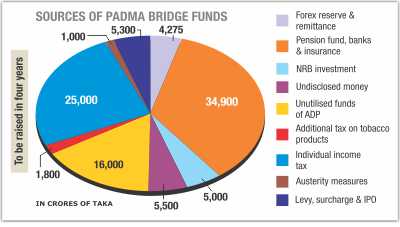 The government can raise funds from domestic sources four times higher than the estimated cost for the construction of Padma bridge, said an economist yesterday, laying out a scheme.

More than Tk 98,000 crore can be raised from 14 possible sources, including migrant workers and non-resident Bangladeshis (NRBs), to build the 6.15 kilometre-bridge, said Abul Barkat, president of Bangladesh Economic Association.

Around Tk 24,000 crore is estimated to be needed to build the bridge, which will boost economic activities in the south and southwest by directly connecting the region with the rest of the country.

Barkat proposed keeping aside 1.25 percent of the country’s foreign exchange reserve each year to complete the construction of the bridge in the next four years.

Another way to attract foreign currencies from the NRBs is to float bonds at an interest rate higher than the savings rate offered by banks in advanced economies, said Barkat.

These foreign sources may enable the government to raise funds equivalent to Tk 9,275 crore, he said.

Barkat spoke at a seminar on ‘Padma bridge on own finance’ at the BEA, chaired by former Bangladesh Bank governor Mohammed Farashuddin.

The rest of the funds can be collected from domestic sources that include floating pension funds, Padma bridge bond, allowing investment of undisclosed money and channelling unutilised funds under the annual development programme (ADP).

The BEA president rolled out the plan as the government said it would build the country’s longest bridge with own funds after the World Bank cancelled its $1.2 billion credit for the bridge on ‘credible evidence’ of ‘corruption conspiracy’.

“The cancellation of the loan by the World Bank is unethical. But it has become a blessing for Bangladesh. It has created scope for building and consolidating national unity,” said Barkat.

He said it is possible to start the construction work now, but emphasis should be given in collecting funds from interest-free sources.

He suggested the government form three high-powered committees, including an integrating panel, which would be headed by the Prime Minster and coordinate and frame policies for the construction of the bridge.

Other two proposed committees are financing committee and technical-engineering committee which Barkat said should be comprised of ministers, lawmakers, experts and representatives from civil society and professional bodies.

He also proposed forming a public limited company to encourage establishment of local industries to make machinery and raw materials for the construction of the bridge.

He said the weighted average cost of capital to build the bridge by taking finance from multilateral lenders led by World Bank will be 2.16 percent.

But the weighted average cost of capital will be 7.63 percent in case of own funds, he said.

“But if we consider the conditionalities imposed by the World Bank on macroeconomic policies, the weighted average cost of capital will be much higher for taking its loans,” said Barkat.

Citing cash flow analysis, he said the construction cost for the bridge could be recovered in 30 years.

He suggested massive campaigns to create awareness among people to build the bridge with own funds.

“Building the bridge with our own funds will be a pride for us and will boost confidence of the nation,” he said.

He said there will be pressures on foreign exchange reserves but many NRBs would be interested to save if the government offers interest rates higher than those in Europe.

Mohammed Farashuddin said the World Bank should make the accusations and evidences public.