The world’s largest offshore wind farm opened off the southeast coast of England on Thursday, as part of the British government’s push to boost renewable energy.

Swedish energy company Vattenfall, which constructed the wind farm, said the 100 turbines off the coast of Thanet could, at their peak, produce enough electricity a year to power the equivalent of more than 200,000 homes. The huge site on the North Sea, built seven miles (12 kilometers) off the coast, will boost the renewable energy now generated by the onshore and offshore wind turbines around the U.K. Thanet wind farm 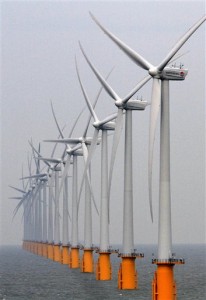 With the opening of the Thanet wind farm, Britain now has the capacity to produce 5 gigawatts of wind-powered energy — roughly the amount of energy needed to power all the homes in Scotland, Energy Secretary Chris Huhne said.

Britain gets only 3 percent of its energy from renewable sources but is aiming for a target of 15 percent by 2020. The nation ranks 25th of 27 European Union countries on action on green power. 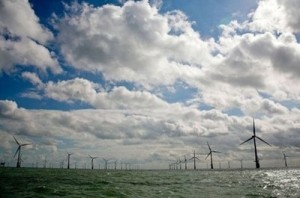 “We are an island nation and I firmly believe we should be harnessing our wind, wave and tidal resources to the maximum,” Huhne said at a ceremony at sea as he officially opened the Thanet wind farm.

Each Thanet turbine is up to 380 feet (115 meters) tall and the site is as large as 4,000 football fields. Vattenfall said its new farm could generate 300 megawatts of energy at full capacity, although critics note that wind power output can be intermittent and variable. The company said the farm is expected to operate for at least 25 years. 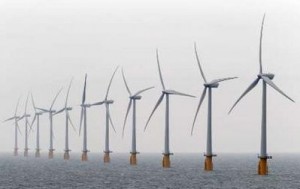 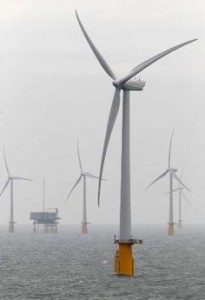 The group wants the British government to guarantee funding of at least 2 billion pounds ($3.1 billion) a year for the Green Investment Bank, which aims to boost private-sector spending on low-carbon technology.