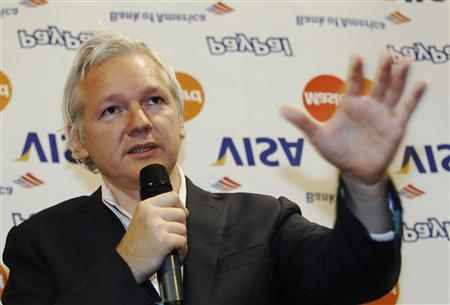 WikiLeaks founder Julian Assange speaks during a news conference at the Frontline Club in London October 24, 2011.

WikiLeaks will have to stop publishing secret cables and devote itself to fund-raising if it is unable to end a financial “blockade” by U.S. firms such as Visa and MasterCard by the end of the year, founder Julian Assange said on Monday.

After releasing tens of thousands of confidential U.S. government cables, WikiLeaks would need $3.5 million over the next year to continue operating, Assange said.

Visa and MasterCard stopped processing donations for WikiLeaks in December 2010 after the United States criticized the organization’s release of sensitive diplomatic cables.

“If WikiLeaks does not find a way to remove this blockade, given our current levels of expenditure we will simply not be able to continue by the turn of the year,” Assange told a news conference.

In July, WikiLeaks filed a complaint to the Directorate-General for Competition of the European Commission, saying Visa and MasterCard had breached antitrust provisions set out by the EU Treaty.

Assange said he hoped the European Commission would make a decision to hold a full investigation by mid-November.

Shoppers to try on items virtually