BREAKING NEWS
Home Business Why BlackBerry 10 Will Be A Success

Why BlackBerry 10 Will Be A Success

Remember the good old days when Research In Motion (RIMM) was king? Was there anyone on Wall Street who didn’t have a BlackBerry? I mean, did you ever try walking into a board-room or go to a meeting with a Nokia? You couldn’t be caught dead with anything else besides a Blackberry.

The main attraction of the Blackberry for the business and Wall Street crowd was one hand simplicity. With s single stroke of the thump, you could read your messages and email (that’s all there was as far as smart-phones back then). With one simple movement, you could maneuver your way around the phone without thinking much about anything.

And at the end of the day, that’s all that matters. Because besides using the phone to communicate, the next most common use was email. Today of course the business crowd also needs, news, twitter, stock quotes and weather. With very few exceptions, most business folks don’t need more than that.

Now if you can get all that with the ease of doing everything with one thumb, why not buy the phone? 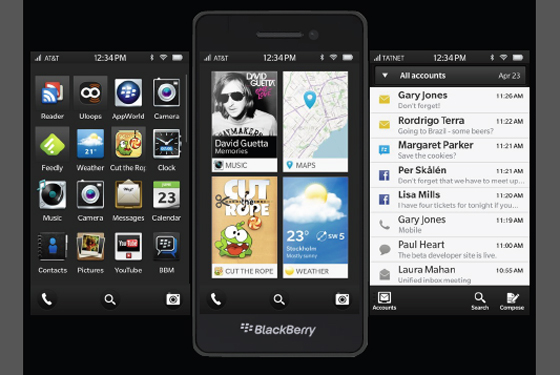 Below is a presentation of the new Blackberry 10 that I only recently viewed. I have to admit, the concept of hub and flow are absolutely revolutionary. I have a Android phone and I am in need of an upgrade. I don’t know anything about the new Blackberry 10 phone as of yet, but if on hardware side it is anything along the Nokia (NOK) Lumia 920, then my next phone will probably be a Blackberry. And this is coming from someone who never owned a Blackberry before.

Can you imagine in 6 months from now, all the Wall Street executives with a Blackberry 10 phone? I mean, what an easier way to differentiate yourself from the herd, than to be seen with yesteryear’s Business statement phone icon?

Apps and other assorted worries

Today’s apps are all build around HTML5, CSS3 and Java Script. In other words, open-source technologies. As such, it is very simple to port almost any app from other platforms to BB10. And while the new Blackberry wont have the hundreds of thousand of apps hat the iPhone 5 has, it will have several thousand in a very short period of time. And that’s rally all it needs to have.

Does Apple have to Worry?

Apple (AAPL) has nothing to worry about as per RIMM is concerned. RIMM will most defiantly not take a bite out of Apple, but it does not need to. It only needs to make a dent. And a dent it will make, because there are many people that will buy this phone, reminiscent of yesteryear and by virtue that this phone is a darn easy and practical phone to use.

I have covered RIMM three times before. Please read my investment thesis here, here and here. The thing to remember about this stock is that it does not need a whole lot to make you a lot of money. If RIMM makes so much as a dent in the smart-phone space, this stock can easily double and triple in no time. And the more I look at the above video, the more I think of all the reasons many people and especially the business crowd, will love it and buy it.

Above all however, Blackberry 10 will be a success because of the business culture that is embedded in RIMM itself, which caters to people who want simplicity, ease of use and speed, without having to think twice about it. And as far as I am concerned, the new Blackberry 10 phone delivers all those things and then some.

On a pure technical note, the stock seems to have bottomed and is now moving upwards. If the resistance of $8,30 is broken, then we will probably see the stock in the $11 range pretty soon. And I also think that the more close we come to the Blackberry 10 launch date, the more positive price action we will see.

AUTHOR : Lucas Atkins, Founder of N4BB.COM! Doing my best to bring you the latest in BlackBerry news, leaks, reviews, videos, and so much more. I will always make sure our content is unbiased and on point. I enjoy a glass of delish pinot with a La Aroma de Cuba, and best of all hanging out with my wife.