Eighteen-year-old Taylor Wilson has designed a compact nuclear reactor that could one day burn waste from old atomic weapons to power anything from homes and factories to space colonies. 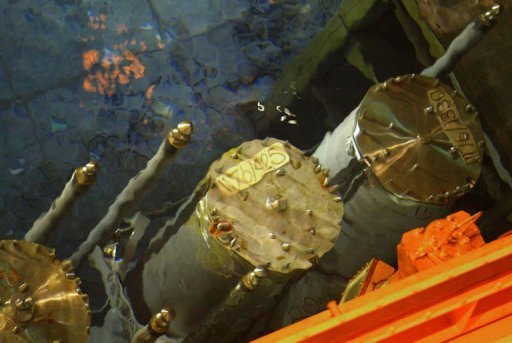 Barrels containing high level radioactive nuclear waste is stored in a pool in North England on September 26, 2002. Eighteen-year-old Taylor Wilson has designed a compact nuclear reactor that could one day burn waste from old atomic weapons to power anything from homes and factories to space colonies.

The American teen, who gained fame four years ago after designing a fusion reactor he planned to build in the garage of his family’s home, shared his latest endeavor at a TED Conference in southern California on Thursday. “It’s about bringing something old, fission, into the 21st Century,” Wilson said. “I think this has huge potential to change the world.” He has designed a small reactor capable of generating 50-100 megawatts of electricity, enough to power as many as 100,000 homes.

The reactor can be made assembly-line style and powered by molten radioactive material from nuclear weapons, Wilson said. The relatively small, modular reactor can be shipped sealed with enough fuel to last for 30 years. “You can plop them down anywhere in the world and they work, buried under the ground for security reasons,” he said, while detailing his design at TED. “In the Cold War we built up this huge arsenal of nuclear weapons and we don’t need them anymore,” Wilson said. “It would be great if we could eat them up, and this reactor loves this stuff.”

His reactors are designed to spin turbines using gas instead of steam, meaning they operate at temperatures lower than those of typical nuclear reactors and don’t spew anything if there is a breach. The fuel is in the form of molten salt, and the reactors don’t need to be pressurized, according to the teenager. “In the event of an accident, you can just drain the core into a tank under the reactor with neutron absorbers and the reaction stops,” Wilson said. “There is no inclination for the fission products to leave this reactor,” he said. “In an accident, the reactor may be toast, which is sorry for the power company, but there is no problem.” Wilson, who graduated grade school in May, said he is putting off university to focus on a company he created to make Modular Fission Reactors.

He sees his competition as nations, particularly China, and the roadblocks ahead as political instead of technical. Wilson planned to have a prototype ready in two years and a product to market in five years. “Not only does it combat climate change, it can bring power to the developing world,” Wilson said with teenage optimism.

“Imagine having a compact reactor in a rocket designed by those planning to habitat other planets. Not only would you have power for propulsion, but power once you get there.”