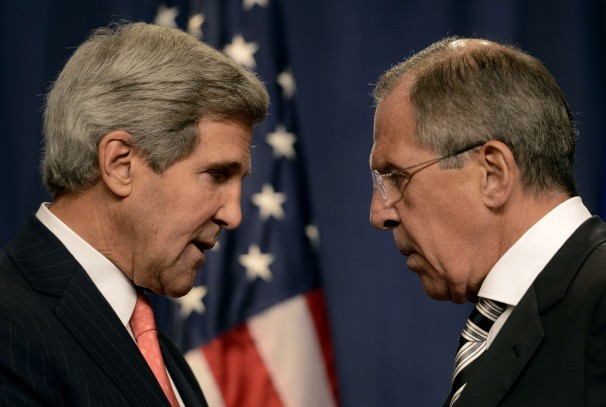 After three long days of discussions in Geneva, the United States and Russia agreed to a draft framework that calls for the destruction of Syria’s chemical weapons facilities and munitions by the first half of 2014. Both nations “expect Syria to submit, within a week, a comprehensive listing, including names, types, and quantities of its chemical weapons agents,” as well as details — including the locations of — the government’s production, storage, and research facilities.

US Secretary of State John Kerry, who has been in negotiations with Russian Foreign Minister Sergey Lavrov to agree to the proposal, said at a press conference on Saturday: “If we can make this framework a success, we save lives in the region and lay the groundwork for more cooperation [between the US and Russia],” reports The Wall Street Journal. “There is no military solution in Syria. It has to happen at the negotiating table.”

“IF WE CAN MAKE THIS FRAMEWORK A SUCCESS, WE SAVE LIVES IN THE REGION.”

The draft framework stipulates that inspections in Syria will be held by the Organization for the Prohibition of Chemical Weapons (OPCW) — a Hague-based agency in charge of ensuring nations uphold international agreements against such weapons — by the end of November. Both the US and Russia also call for the destruction of Syrian chemical weapon production facilities by the end of November, including equipment used to fill weaponry with the gases. The complete elimination of Syria’s chemical weapon capabilities is set for the first half of 2014.

On Tuesday Syria said it would join the 189 nations that have signed the 1993 Chemical Weapons Convention prohibiting the production, collection, or deployment of chemical weapons. It typically takes some time from the date a nation signs the agreement to become a full member of the OPCW, but today’s framework says that Syria has agreed “to provisionally apply the Convention prior to its entry into force.”

The US and Russia will submit a plan to the OPCW Executive Council over the coming days that follows the stipulations set forward in today’s framework. From there, the two nations will work to codify a plan under a UN Security Council resolution, and both agree that it should allow for punitive action under Chapter 7 of the UN Charter if Syria doesn’t follow through with demands. Russia holds veto power on the Security Council, however, and it’s widely expected the nation would prevent any military strike against Syria for failing to uphold today’s agreement. Lavrov made a point to say today that “there is nothing said about the use of force, or of automatic sanctions” in today’s framework.

Today’s agreement comes after the US Senate agreed to postpone a vote on whether to authorize limited military strikes in Syria. The Obama administration is confident that the Syrian government, led by President Bashar al-Assad, used the chemical weapon Sarin on his own people in an August 21st attack just outside Damascus that left over 1,400 dead. This past Monday, Secretary Kerry suggested in offhand remarks that a military strike could be averted if Assad “could turn over every single bit of his chemical weapons to the international community in the next week.” The next day, Foreign Minister Lavrov formally put forth a proposal similarly calling for Syria to give up its chemical weapons stockpiles.

One of the major obstacles to an agreement between the US and Russia was settling on the number of chemical munitions held by the Assad regime. Today’s framework says the two sides have “reached a shared assessment of the amount and type of chemical weapons involved,” and an American official tells The New York Times that both agreed that 1,000 metric tons of Sarin and mustard gas are in Syria. The two have not agreed on the locations of chemical weapon sites however, and the paper suggests the differences stem from a broader dispute over whether the Assad regime or the rebels seeking to overthrow him are responsible for the attack in Damascus. Today’s framework carefully avoids placing blame, saying that the decision to quickly dismantle chemical weapon capabilities was “necessitated by the prior use of these weapons in Syria and the volatility of the Syrian civil war.”

Update: President Obama says in a statement that he welcomes today’s agreement, calling it “an important, concrete step toward the goal of moving Syria’s chemical weapons under international control so that they may ultimately be destroyed.” He added that “the international community expects the Assad regime to live up to its public commitments,” and he warned that the US alongside Russia, the UK, France, and the UN will “ensure that this process is verifiable, and that there are consequences should the Assad regime not comply with the framework agreed today.”

“IF DIPLOMACY FAILS, THE UNITED STATES REMAINS PREPARED TO ACT.”

Most importantly, the President confirmed reports from the Pentagon that the US military has not moved its destroyers from their positions in the Mediterranean Sea, where they’ve been placed to maintain “strong military posture” for a possible strike on Syria. Obama says in today’s statement that “if diplomacy fails, the United States remains prepared to act.” Lastly, the President says that it is “in part because of the credible threat of U.S. military force” that “we now have the opportunity to achieve our objectives through diplomacy.”