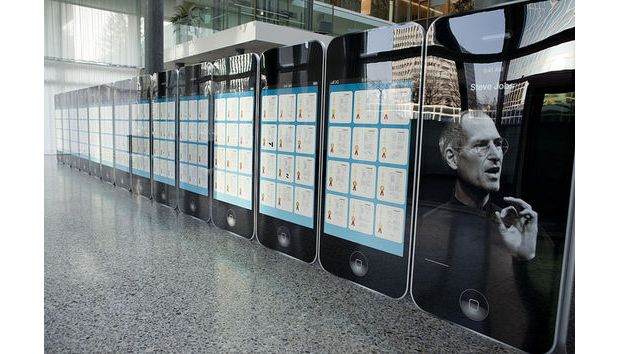 This Saturday is two years since the death of Steve Jobs. Yet despite much concern in 2011 for the fortunes of Apple, in 2013 the company has seen sales of the iPhone 5S and 5C actually beat previous launches of new phones. Did Jobs define inspirational leadership and how does this legacy live on?

The day after the 1999 film “Pirates of Silicon Valley” was released, actor Noah Wyle (who played Steve Jobs), was sitting at home in his living room when the phone rang. “Noah?” said the voice at the other end of the line, “Yes,” answered Wyle, “This is Steve Jobs.”

Wyle told CNN Money that his heart started beating through his shirt. Jobs continued: “I’m just calling to tell you I thought you did a good job. I hated the movie, I hated the script, I think if you had spent a little more time and a little more money and maybe a little more attention to detail, you could have had something there. But you were good.” The only response Wyle could think of was: “Thank you, sir.”

I wonder if the exchange above epitomises the essence of inspirational leadership. Maybe it explains how Jobs managed to get away with his much publicised offensiveness for all those years? Perhaps these three sentences neatly summarise an approach to management, leadership and business. If Wyle’s memory is to be trusted, those roughly 50 words show Jobs is a hyper-critical; they demonstrate that he can easily be harsh… but all this simply intensifies the value of his praise.

The nub is surely this: if Jobs was pleased, you would be desperately happy because he was not indiscriminate; maybe arbitrary, but not indiscriminate. Perhaps the dubious take-away for managers and leaders is that once you’ve convinced others that you know what you’re talking about, you can be as nasty as you like because you’ve already proved yourself? You don’t have to be of course, but you can be, and people will still respect you.

When Robert Sutton was researching his book, The No Asshole Rule: Building a Civilized Workplace and Surviving One That Isn’t, he found a troubling volume of Silicon Valley leaders believed that Steve Jobs was living proof that being an asshole boss was fundamental to building a great company. The debate has intensified since Steve Jobs’ death and the publication of his biography by Walter Isaacson (in October 2011), which revealed so much more about him.

Jobs may have been unbelievably vile to deal with, but his employees valued his opinion and cared deeply about what he thought. This is critical, because leadership itself can be perceived as a particularly emotion-laden process. In an organisation, the leader’s mood has some effect on his/her group. One theory is that leaders transmit their moods to other group members through the mechanism of emotional contagion.

But theory aside, what skills do organisations really need to thrive? In an IDG Connect survey last year we asked which skills professionals thought they were lacking from their environments. The findings, based on a survey of 343 IT decision- makers from Europe showed 23% felt creativity was lacking; whilst 40% felt senior technical skills were missing. This is interesting, though not surprising, as when people are asked what they feel is missing they tend to focus on tangible things like “money” for example, rather than intangible things like “happiness”.

The same could be said about qualities like “inspiration”, “innovation” and “creativity”. It is hard to say exactly what these are and even more difficult to guarantee what they will deliver. The fact is, unless you’re in one of those creative ad agencies with funky chairs and exciting slides down to the car park, “floaty” qualities can be impossible to talk about with any real meaning. Would more “creativity” at your workplace make it better? I imagine it is difficult to say until it is there.

So what is inspirational leadership? In a recent article about Richard Branson, Forbes contributor Carmine Gallo jotted down what he felt were the seven secrets. This was the typical marketing-style checklist consisting of: igniting enthusiasm, navigating action, selling the benefit, painting a picture, inviting participation, reinforcing optimism and encouraging potential. And whilst I don’t for a minute doubt all this is correct, I do wonder if Steve Jobs’ example could provide a more prosaic answer: demonstrate you know your business and make others strive to impress you. The more successfully it is done, the more you inspire (on a sliding scale).

This is far easier said than done of course, and most people simply can’t deliver like Jobs could, which might be why inspiring leaders are so few and far between.  Maybe the best thing to do is simply quote Jobs? “Innovation has nothing to do with how many R&D dollars you have. It’s not about money. It’s about the people you have, how you’re led.”

This brings us back full circle to the fortunes Apple. At the start of September, our Editorial Director, Martin Veitch, wrote a fantastic opinion piece on the bizarre publicity surrounding the new iPhones. As he put it: “In a market characterised by blink-rate change and the new, new thing, Apple is running out of reasons for people to stay loyal.” Whilst in the next paragraph he concludes: “If you build a better mousetrap the world will beat a path to your door. But if you can’t do that then you’re down to baffling them with BS.”

The truth is, despite sales of the latest iPhones, Apple is slowly being caught up by Android devices and Samsung products (especially) are even beginning to take over on the cool stakes.  Yet surely none of this  has anything to do with leadership? Waning fortunes of companies is inevitable because, like the insane popularity of Sony Walkmans in the 1980s and hegemony of Nokia phones in the 1990s, this type of obsessional product-love is unsustainable.

Jobs’ leadership legacy continues to make waves through the world of business management today. His company is still top of its game, (despite numerous other contenders snapping at its heels). Yet Apple has continued without Jobs… and it seems unlikely, that even his much publicised vision would have been an antidote for the real-life truth that one brand simply can’t stay top forever.

First-ever colour X-ray on a human

Sony at greater risk than Panasonic in electronics downturn