The Final Frontier : Airbus vs. Boeing 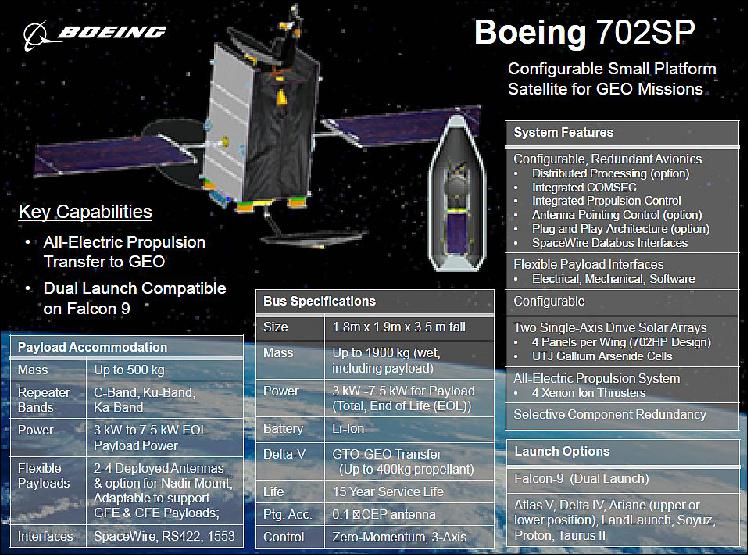 e-News® | The NEWS Company…San Diego, June 17, 2015 :  The rivalry between Airbus (Static C4, Hall Concorde 17) and Boeing (Chalet 321, Chalet 324) slipped the surly bonds of Earth in March when the American company launched its first two all-electric satellites. The spacecraft, each carrying multimedia and television payloads, were the first two of Boeing’s 702SP vehicle, which dispenses with chemical boosters and is propelled to operating altitude using electric ion engines. 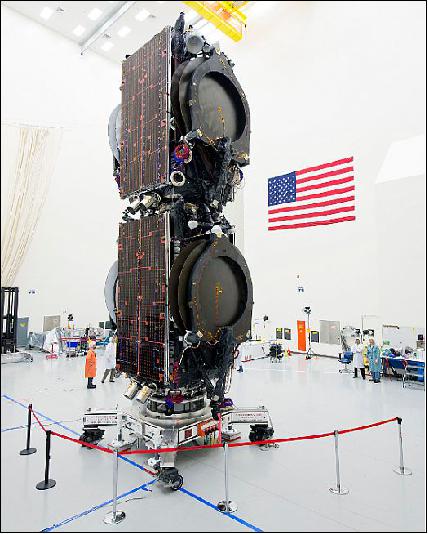 Photo of the two satellites ABS-3A and Eutelsat 115 West B at Boeing premises in stacked launch configuration (image credit: Boeing)

The drawback is that the spacecraft must fly an oval-shaped transfer orbit, maneuvring toward its geosynchronous position using the lower-powered electric engines. This takes around six months, whereas a chemical-powered spacecraft would get there in a couple of weeks. The big gain is in weight savings: around half the mass of a geosynchronous satellite is taken up by liquid fuel. This means an all-electric satellite can cost less to launch, as it will be lighter; or it can double its payload capacity by using the mass no longer needed for fuel.

But while Boeing may have got all-electric satellites into space first, Airbus believes it has a better, longer-term all-electric product. Eric Béranger, head of programs in the Space Systems division of Airbus D&S, points to the company’s long investment in electric propulsion systems, and says its satellites can reach orbit faster, too.

“Airbus D&S has been using electric propulsion for a long time,” he tells ShowNews. “The Eurostar E3000 offers this technology and has been flying it successfully since 2004 for station-keeping. Electric engines available at that time featured enough thrust for station-keeping but were not powerful enough for full electric orbit-raising. With the new generation of plasma thrusters, we can propose raising the orbit from transfer to geostationary in typically four months. Since last year, we have signed three contracts with this technology.”

Béranger also stresses that Airbus’s spacecraft are “roughly twice as powerful as other all-electric satellites sold so far,” citing 15kW of payload power in the 5- ton class and 11kW in the 3-ton class. Customers are interested in both lower-cost launches and increased payload, so the company is keeping all options open.

“Not all operators need huge payload capabilities, but launchers need to be filled in an optimal way,” Béranger notes. “Our new Eurostar Neo product line will propose electric propulsion, chemical propulsion, or a mix, to offer the customer the possibility to optimize the mission between capability, cost and time [to orbit].”