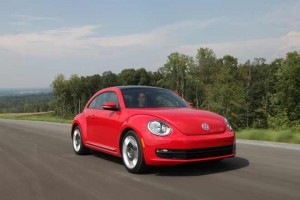 The car that started out on Ferdinand Porsche’s drawing board in the 1930s went on to become a car just about anybody would drive — until it was reborn in the 1990s.

The original, iconic Volkswagen Beetle of the 1960s was a cool, hip, economical and fun means of getting around. It more or less single-handedly popularized small cars. Even VW’s ad campaigns revolutionized Madison Avenue in ways Don Draper wouldn’t have seen coming. In the era of bigger is better, chrome is king and power is everything, Volkswagen made it cool to be different. It was fun to be small, slow and cheap to own.

The Beetle spent a few decades on hiatus (at least here in the U.S.), before being reborn in 1998. And while the New Beetle for the new millennium looked familiar, it was really only appreciated by those with two X chromosomes.

Now, Volkswagen is rebooting the Beetle yet again. With the new campaign, the company has a big challenge on its hands. Sales of the new Beetle have been good, despite the lack of a major update since its introduction in 1998. But now Volkswagen wants to sell the latest Beetle to the other half of the population. And if you’re willing to forget about the last gen’s flower holder, VW may be able to pull it off.

Our middle-of-the-range tester came equipped with the 170 horsepower, 2.5-liter four-cylinder engine that provides more than enough acceleration for commute duty. If you do want more, it’s there for the taking, with a 200 horsepower turbocharged version available. Underpinned by the popular and carefully crafted VW Golf, the Beetle is a decent handler, and unlike other small front-wheel-drive cars, understeer doesn’t make an appearance until you’re exceeding reasonable cornering speeds. And with a firm but comfortable suspension, you can take a few corners on the faster side when you feel the urge.

Had this been the car that was reintroduced in the ’90s, VW might have been able to avoid the reputation it’s acquired over the past 15 years. Unlike its predecessor’s triple bubble shape, this Beetle is more similar to the original in profile, albeit slightly bigger. The hood sticks out somewhat unusually, and the lines from the roof to the rear bumper follow the same continuous curve of its iconic grandparent.

Inside there is more than enough room in the front seats for anybody over six feet tall, and while the back seats aren’t as roomy, there’s enough space for two adults on a shorter trip, or a longer trip if they’re not whiners. The flat-bottomed steering wheel has all the usual redundant controls for radio, Bluetooth phone, cruise control and the trip computer. The switchgear is simple and straight forward, including the GPS navigation system which takes only seconds to figure out for anybody who doesn’t have a blinking “12:00? on their microwave.

The Beetle isn’t equipped as a luxury car, and there are some components inside that are decidedly plastic. But the painted dash and top of the door matches the exterior and conveys a utilitarian touch to avoid more plastic than necessary. The doors are perhaps a bit out of proportion for the car, at least in weight. They do take a good hefty push to open if you’re parked on a slope and need to get out on the uphill side.

On a shortish 180 mile road trip, the Beetle was plenty comfortable to drive. It’s not whisper-quiet, but that has more to do with aerodynamics than poor sound isolation. Fuel economy is good, but not great by today’s quickly rising standards. Official mileage stands at 22 mpg in the city and 29 on the freeway for the 2.5 liter with the automatic transmission. On an easy-going trip with a soft foot on the pedal, our Beetle managed a little over 30 mpg. Could be worse, but could be a lot better.

The question remains: What is at the top of the list to attract drivers to the 2012 Beetle?

Had you been stranded on an island for the past 15 years, you’d likely think the current Beetle is a great tribute to the original. And perhaps a little nostalgia and the desire for a reasonably economical, even sporty car would have you ordering one. But unless you’re really attracted to the style of the original icon, the VW Golf is the better choice. It pretty much gives you the same car with four doors and more room for anything you want to bring with you.