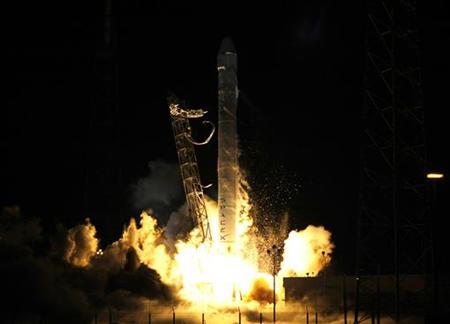 Astronauts plucked a commercial cargo ship from orbit on Wednesday and attached it to the International Space Station, marking the reopening of a U.S. supply line to the orbital outpost following the space shuttles’ retirement last year.

After a 2-1/2 day trip, Space Exploration Technologies’ Dragon cargo ship positioned itself 33 feet away from the $100 billion research complex, a project of 15 countries, which has been dependent on Russian, European and Japanese freighters for supplies.

Astronaut Akihiko Hoshide then used the space station’s 58-foot-long (17.7-meter) robotic arm to grab hold of a grapple fixture on the side of the capsule at 6:56 a.m. EDT (1056 GMT) as the spacecraft flew 250 miles above the Pacific Ocean, off the coast of Baja California in northwest Mexico.

“Looks like we tamed the Dragon,” commander Sunita Williams radioed to Mission Control in Houston.

“We’re happy she’s on board with us. Thanks to everybody at SpaceX and NASA for bringing her here to us. And the ice cream,” she said.

The Dragon’s cargo includes a freezer to ferry science samples back and forth between the station and Earth. For the flight up, it was packed with chocolate-vanilla swirl ice cream, a rare treat for an orbiting crew.

Williams and Hoshide attached the capsule to a docking port on the station’s Harmony connecting module at 9:03 a.m. EDT (1303 GMT).

It is expected to remain docked to the station for about 18 days while the crew unloads its 882 pounds (400 kg) of cargo and fills it with science experiments and equipment no longer needed on the outpost.

The flight is the first of 12 planned under a $1.6 billion contract NASA placed with privately owned Space Exploration Technologies, or SpaceX, to deliver cargo to the station.

The U.S. space agency’s second supplier, Orbital Sciences Corp, plans to debut its Antares rocket later this year. A demonstration run to the station is planned for February or March.

NASA also is working with SpaceX, Boeing Co and privately owned Sierra Nevada Corp to design space taxis that can fly crew to and from the station, with the goal of breaking Russia’s monopoly on those flights by 2017.