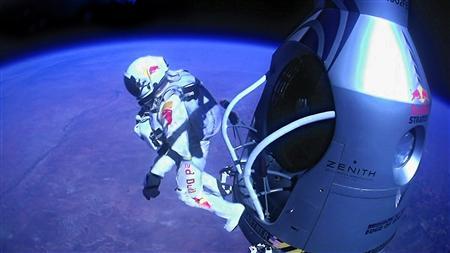 An Austrian daredevil leapt into the stratosphere from a balloon near the edge of space 24 miles above Earth on Sunday and safely landed, setting a record for the highest skydive and breaking the sound barrier in the process.

Cheers broke out as Felix Baumgartner, 43, jumped from a skateboard-sized shelf outside the 11-by-8-foot (3.3-by-2.4 meter) fiberglass and acrylic capsule that was carried higher than 128,000 feet by an enormous balloon.

“We love you Felix!” screamed the crowd gathered in a mission control setting at his launch site in Roswell, New Mexico as more than 8 million people watched his feat online.

Baumgartner’s body pierced the atmosphere at 833.9 miles per hour, according to preliminary numbers released by Brian Utley, the certification official for the Federation Aeronautic International, at a press conference afterward.

Baumgartner’s speed clinched one of his goals: to become the first skydiver to break the sound barrier, typically measured at more than 690 mph. And he did so on the 65th anniversary of legendary American pilot Chuck Yeager’s flight shattering the sound barrier on October 14, 1947.

Baumgartner landed safely on the ground and raised his arms in a victory salute just 10 minutes after he stepped into the air. Soon he was hugged by his mother and father, who took their first trip outside Europe to see his historic plunge, and his girlfriend jumped up and wrapped her legs around him.

“It was way harder than I expected,” Baumgartner said. Recalling his final words before he stepped into the stratosphere, he said, “Sometimes you have to get up really high to know how small you are.”

The Austrian has made a career of risky jumps including skydiving across the English Channel and parachuting off the Petronas Towers in Malaysia.

Earlier Baumgartner prepared to jump from the pressurized capsule by going through a checklist of 40 items with project adviser Joe Kittinger, holder of a 19-mile high altitude parachute jump record that Baumgartner smashed.

Earlier in the flight, he expressed concern that his astronaut-like helmet was not heating properly.

“This is very serious, Joe,” said Baumgartner as the capsule, designed to remain at 55 degrees Fahrenheit ascended in skies where temperatures were expected to plunge below -91.8 F (-67.8 C), according to the project’s website. “Sometimes it’s getting foggy when I exhale. … I do not feel heat.”

Baumgartner’s ascent into the stratosphere took about 2-1/2 hours.

The 30 million-cubic-foot (850,000-cubic-metre) plastic balloon, is about one-tenth the thickness of a plastic bag, or roughly as thin as a dry cleaner bag.