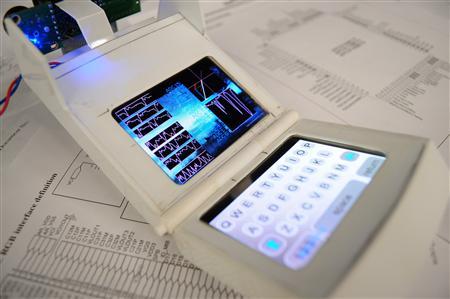 Dr. Peter Jansen, a PhD graduate of the Cognitive Science Laboratory at McMaster University in Hamilton, Ontario, Canada, has developed a scientific measurement device based on the tricorders used by Captain Kirk, Spock, Dr. McCoy and other space adventurers on the classic TV series that has spawned numerous spin-offs in more than 45 years.

“Star Trek inspired me to be a scientist” said Jansen, who has been formally working on his tricorder prototypes since 2007, but toying with the idea of making a functioning device since he was “a kid in high school.”

The 29-year-old Jansen’s school days spanned the late 1990s when “Star Trek: Voyager” was on the air. It featured his favorite tricorder, a model with screens on top and bottom.

The first tricorder appeared on the original show’s initial episode in 1966, when Capt. Kirk swaggered toward audiences with his phaser weapon holstered to his side but a tricorder in his hand. The hand-held devices for data sensing, analysis and recording, have been a part of “Star Trek” ever since.

But if Jansen, a self-confessed “addicted maker” of things, is successful at developing, testing and bringing his instrument into the public, the tricorder may not be just the stuff of “Star Trek” prop rooms. It may be used for real.

Jansen said his tricorder can take atmospheric measurements, or ambient temperature, pressure or humidity. It can take electromagnetic measurements to test magnetic fields, and it can make spatial measurements of distance, location, or motion.

Jansen thinks of his tricorder as a “general tool” — a kind of “Swiss Army Knife” — with practical uses in building inspection, for instance, where it might help taking temperature and humidity readings or be a distance sensor to measure rooms.

It resembles the device carried by countless “Away Team” members in “Star Trek – The Next Generation” – his favorite of the “Star Trek” shows, he notes.

No independent group has yet verified his claims for the device which, he said, is one reason for placing his designs on a public website as an “open source” that technology makers can utilize to test and tinker.

Jansen has posted schematics and designs of his first and second prototypes, the Mark 1 and Mark 2, for anyone to see and build. Jansen expects to have his latest version, the Mark 4, produced for “about $200.”

“Everything you need to build one is on line” at www.tricorderproject.org, said Jansen. He hopes others will follow his lead.

While it may sound like the stuff of science fiction, Jansen isn’t the only one to take notice of just how useful a real functioning tricorder would be – especially as a medical tool.

Telecommunications giant Qualcomm Inc this year launched the “Tricorder X-Prize Contest” with the slogan “Healthcare in the palm of your hand.” Qualcomm hopes to motivate developers with a $10 million prize to make medical tricorders a reality.

Wanda Moebus of the Advanced Medical Technology Association, who is not affiliated with Jansen or Qualcomm, told Reuters the X-Prize “is really cool,” but cautioned that making a real medical tricorder device “would have to be measured on its safety and effect, like all other medical technologies.”

Jansen said he has been approached by “a couple of teams” about the X Prize, but added that his prototypes are more for science research than medical tools.

Besides, he said he already is on to his next frontier, making a sort of “replicator,” another “Star Trek” device that will create 3D objects and foods that are dimensional copies of real items.

Jansen’s “replicator” is a 3D printer, which in itself is not really new, but the scientist thinks about it in terms reminiscent of “Star Trek’s” famous prologue. It’s “like nothing we’ve ever seen before,” Jansen said.

Shut down your computer by pressing only a key