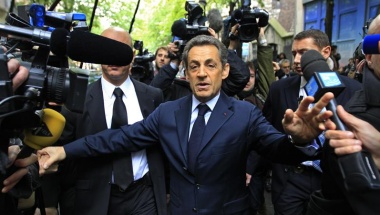 French President Nicolas Sarkozy appealed directly to far right voters on Monday with pledges to get tough on immigration and security, after a record showing in a first round election by the National Front made them potential kingmakers.

Polls show center-right leader Sarkozy on course to become the first French president to lose a bid for re-election in more than 30 years, trailing Socialist challenger Francois Hollande ahead of a May 6 run-off.

Hollande piped Sarkozy in Sunday’s 10-candidate first round by 28.6 percent to 27.2 percent, but National Front leader Marine Le Pen stole the show, surging to 17.9 percent, the biggest tally a far-right candidate has ever managed.

Her performance mirrored advances across the continent by anti-establishment Eurosceptical populists from Amsterdam and Vienna to Helsinki and Athens as the euro zone’s grinding debt crisis deepens anger over government spending cuts and unemployment.

“National Front voters must be respected,” Sarkozy told reporters as he left his campaign headquarters in Paris. “They voiced their view. It was a vote of suffering, a crisis vote. Why insult them? I have heard Mr. Hollande criticizing them.”

The unpopular Sarkozy, the first sitting president to be forced into second place in the first round of a re-election bid, now faces a difficult balancing act to attract both the far-right and centrist voters he needs to stay in office.

Returning to the campaign trail on Monday, Sarkozy hammered home promises to toughen border controls, tighten security on the streets and keep industrial jobs in France – signature issues for Le Pen at a time of anger over immigration, violent crime and unemployment running at a 12-year high.

After five turbulent years leading the world’s fifth economy, Sarkozy could go the way of 10 other euro zone leaders swept from office since the start of the crisis in late 2009.

Hollande has vowed to change the direction of Europe by tempering austerity measures with higher taxes on the rich and more social spending. Polls published on Sunday predicted he would win the run-off with between 53 and 56 percent of votes.

But the strong showing of Le Pen, gravel-voiced 43-year-old daughter of National Front founder Jean-Marie Le Pen, offered Sarkozy a glimmer of hope by suggesting there are more votes up for grabs on the right than had been thought.

Hollande blamed Sarkozy for fuelling the rise in the far right and said he would make no attempt to seek National Front votes. “Since some voters supported them out of anger, I will listen to them…but I will not court the far right,” he said.

On a strong turnout of 80.2 percent, more than a third of voters cast ballots for protest candidates outside the mainstream, foreshadowing a possible reshaping of France’s political balance of power at parliamentary elections in June.

Le Pen’s focus is now on securing a strong National Front showing in the parliamentary vote, and she is keeping her distance from Sarkozy, describing him as doomed.

“Faced with an outgoing president who will leave a much weakened party, we are the only true opposition to the neo-liberal left,” she told cheering supporters on Sunday.

She said she would give her view on the runoff at a May Day rally in Paris next week. Leading National Front figures, including Le Pen’s partner and party vice-president Louis Aliot, suggested that she would not formally endorse either candidate.

It is hardly the first time Sarkozy has appealed to National Front voters before a runoff – the tactic him win his first mandate in 2007. Le Pen’s strategy director Florian Philippot said it would not work twice: “The French no longer fall for this electioneering game Sarkozy plays.”

Financial market analysts say whoever wins in two weeks’ time will have to impose tougher austerity measures than either candidate has admitted during the campaign, cutting public spending as well as raising taxes to cut the budget deficit.

European markets were sour after the French results and the Dutch government’s failure to push through an austerity budget made elections there almost unavoidable. The euro retreated from two-week highs, European stocks opened lower, and safe-haven German bonds opened higher, increasing the premium investors demand to hold French and Dutch bonds.

“It’s beginning to look like the perfect storm,” said Stewart Richardson, chief investment officer at RMG. “It looks like the French vote was more against Sarkozy than we would have thought last week, and so there is a leftward lurch in France.”

Sarkozy challenged Hollande to three television debates over the next two weeks instead of the customary one. But Socialist aides said Hollande, who has no ministerial experience and is a less accomplished television performer than Sarkozy, had made clear he would accept only one prime-time live debate, on May 2.

Communist-backed hard leftist Jean-Luc Melenchon, who polls showed at one stage challenging Le Pen for third place, finished a distant fourth on 11.1 percent, ahead of centrist Francois Bayrou with 9.1 percent.

Political pundits said Hollande still appears to have larger reserves of second-round votes than Sarkozy, who would need to pick up at least three quarters of Le Pen’s supporters and two thirds of Bayrou’s to squeak a wafer-thin victory.

Polls taken on Sunday by three institutes suggested that between 48 and 60 percent of Le Pen voters planned to switch to the president, while Bayrou’s backers split almost evenly between the two finalists, with one third undecided.

“The game is getting very difficult for Nicolas Sarkozy,” Jerome Saint-Marie of CSA polling agency told i>TELE. “There’s a genuine demand for social justice, precisely because times are hard and voters see sacrifices will have to be made … What they want is that this pain is fairly shared.”

Melenchon, whose fiery calls for a “citizens’ revolution” drew tens of thousands to open-air rallies, urged his followers to turn out massively on May 6 to defeat Sarkozy, but he could not bring himself to mention Hollande by name.

Clementine Autain, spokeswoman for his Left Front coalition said his supporters would do all they could to get Sarkozy out and Hollande into power.

“Sarkozy is going to be torn between campaigning in the middle ground and campaigning on the right. He’ll have to reach out to the right between the rounds, so he’ll lose the centre,” said political scientist Stephane Rozes of the CAP think-tank.

If Hollande wins, joining a small minority of left-wing governments in Europe, he has promised to renegotiate a European budget discipline treaty signed by Sarkozy. That could presage tension with German Chancellor Angela Merkel, who made the pact a condition for further assistance to troubled euro zone states.

A spokesman for Merkel said on Monday she continued to support Sarkozy but had no plans to campaign on his behalf.