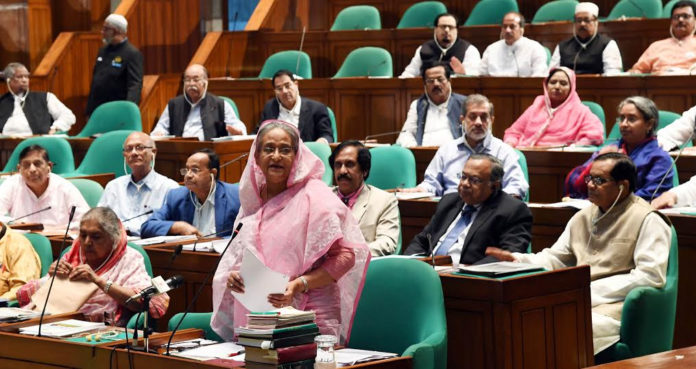 #thenewscompany :  Prime Minister Sheikh Hasina today urged the countrymen to remain careful so that no evil force can destroy the peace and happiness from the life of the people.

“People are living in peace and happiness. We have to remain careful so that no evil force
can snatch the peace and happiness,” she said in her valedictory address in the twenty-
first session (Budget Session) of the 10th Jatiya Sangsad here in the House.

The Leader of the House said her party came to power with the mandate of people,
having the opportunity to work for the people. If people think that they didn’t commit any
wrong by giving us votes they will give us votes again in the next election to continue the
ongoing development, she said.

The prime minister said the government has given the budget of 2018-2019 fiscal taking
into account the problems of every group, profession and class aimed at building a
beautiful country. If people give us votes then we would go ahead with the pace of
development, she added.

Sheikh Hasina said her government had to come across a long way amid many
difficulties and foil orchestrated conspiracy to reach to the present state. Many people had
to lay their lives and many people became crippled for life time to make the democracy
sustainable.

The prime minister hoped that Bangladesh would not lose its road to development in the
coming days and go ahead amid all adversities to materialize the dream of the Father of
the Nation Bangabandhu Sheikh Mujibur Rahman.

Leader of the House extended her thanks to the Opposition members for their lively
presence and constructive role in making the parliament functional, maintaining a decent
atmosphere and bringing out the House from the culture of malpractices.

“The present parliament constituted through the election in 2014 has set an example of
constructive parliamentary practice in the country,” the prime minister said.

Pointing out her government’s decision to give shelter to more than 1.1 million forcely
displaced Rohingyas from Myanmar, the prime minister said the whole world has
acclaimed the decision, which is a big achievement for the country.

Sheikh Hasina said no country now can neglect Bangladesh and they acknowledged that
the development of Bangladesh is getting the shape of sustainability.
Sheikh Hasina said the prime and foremost priority of her government is to ensure
welfare of the people as people have given her the mandate to constitute the government.

The prime minister said her government has attached utmost importance to education and
reached the healthcare services to the doorstep of the people and enlarged the social
safety net to alleviate poverty.

Reiterating her government’s commitment to reach electricity to every house the prime
minister said transmission lines are being constructed to ensure hundred percent coverage
of electricity.

Highlighting her government’s stride to reach the medical services to the people the
prime minister said the government has put in place a Medicare system to facilitate every
people getting treatment.

“But, it’s now turned into a fashion for a group of people to go abroad for treatment,
despite having the same facility in the country. The government has established many
specialized institutions for treatment in addition to recruitment of doctors and specialized
nurses, she said.

Sheikh Hasina said her government is working for people of all classes. The salaries of
the government employees has been increased about 123 percent while arrangement were
taken for their better housing and other facilities all over the country.

The prime minister said 100 Specialized Economic Zones (SEZs) are being established
for creating employment opportunity particularly in the areas like Cumilla, Nilphamari,
and Ishwardi where youths have limited scope of jobs.

About the movement for reforming quota system from civil services the prime minister
said the government has formed a committee to look into the matter. But, the rampage of
a section of students in the name of movement is not acceptable, she said adding that it’s
not a movement but rowdiness.

“The culprits involve in destruction of the residence of VC and other properties of the
university were traced out from cctv footage and none of those culprits would be spared,”
she said.

About her plan to build a planned Dhaka city the prime minister said all roads of the city
built on culverts and canals would be demolished to revive the water flows and if
necessary flyovers would be constructed over the canals.

Sheikh Hasina hold responsible all military regimes for destroying the beauty of the
Dhaka city and nature.

Putin to put Russian government on Linux by 2015

An animated history of drones